Skip to content
ASNF 1 year ago 4 min read
Wingspan ($9.99) by Monster Couch is a digital adaptation of the original board game with...

Wingspan ($9.99) by Monster Couch is a digital adaptation of the original board game with the same name designed by Elizabeth Hargrave. This digital release already debuted on other platforms including Steam, Nintendo Switch, and Xbox and it has finally arrived on iOS and iPadOS as a premium game with every feature you’d expect from prior versions. With many board games getting digital adaptations, the iPad in particular feels like a perfect fit with its large screen and touch support. I hadn’t played Wingspan before on any platform, so it has been interesting learning how to play it and experiencing it over the last two weeks.

What makes Wingspan stand out, barring the focus on birds and how relaxing things are, is its gorgeous art. Wingspan’s digital version expands on the board game with sublime animations and music to make a laid-back game even better. Your aim here is to build up your nature preserve by adding more birds and raising your own score. You do this by focussing on different areas of growth and by strategizing on the fly with what birds to summon, when to focus on food versus eggs, specific in-game goals, and more. I’m not even going to bother trying to go over the basic controls, because it is pretty complex initially. There is a lot to keep in mind as you try to draw more birds and the requirements to get them revolve around the food you get from the bird feeder dice tower needing to match the bird’s requirements. I did the tutorial twice and tried playing on my own before Wingspan finally clicked and I understood the game flow against others.

In its current state, you can play in a custom game solo with AI or alongside friends, play a game with the automa ruleset, view the tutorial, or head over online to play real-time or asynchronous multiplayer. Real-time multiplayer allows for up to 5 minutes per turn in a 3 player setting. Asynchronous has up to 72 hours per turn in a 3 player setting. There is also the Champ of the Birds challenge mode which changes each week.

Digital adaptations of board games should be best on iPad because of the screen real estate and flexibility of control options available on iPadOS. Wingspan’s touch controls are very good but they could be a lot better in the tutorial. Sometimes, things aren’t clear enough and you might miss the small touch target arrow to progress. The in-game controls in an actual round are good on iPad. On iPhone, Monster Couch has adapted the controls really well but the text will be a bit too small for some people. On iPhone 11, I found it very good overall despite the few tiny button touch targets. 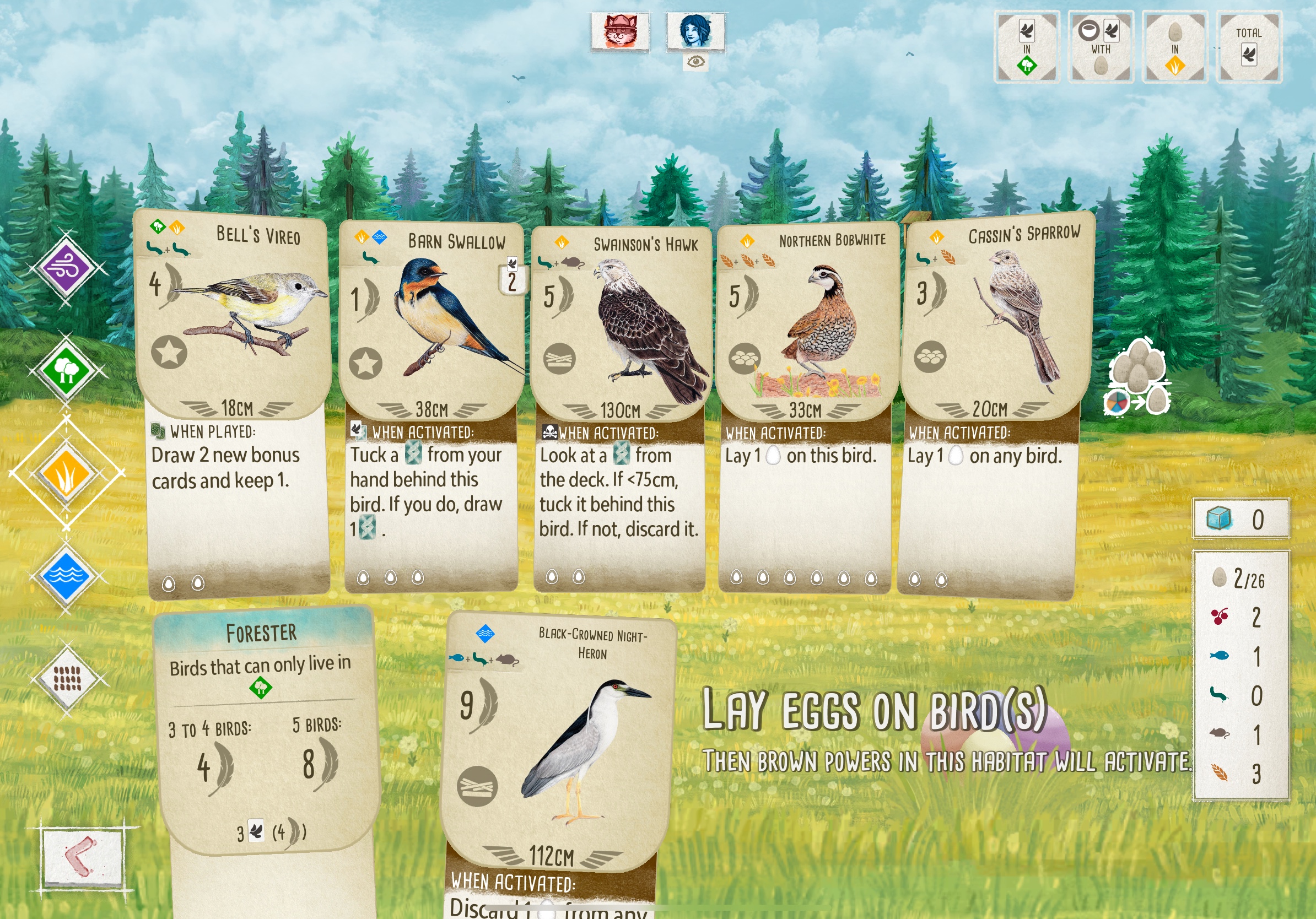 The highlight of Wingspan and one of the reasons I want to get the physical board game is the art. Instead of just having some basic card animation, this digital adaptation has gorgeous transitions in between areas, lovely subtle card animations, and feels super polished both with visuals and performance on the devices I tried it on. The visuals are complemented by the relaxing score by Paweł Górniak and the environmental and bird sounds.

I’m not sure how or if this is even possible in a Nintendo Switch or Xbox game, but Wingspan on iOS notifies you for in-progress games. I tried this on both iPhone and iPad with different progress on both. This adaptation of Wingspan gets a lot right in general as a way to experience Wingspan without any prior experience or knowledge which is very important, but it isn’t a perfect conversion on iOS and iPadOS. 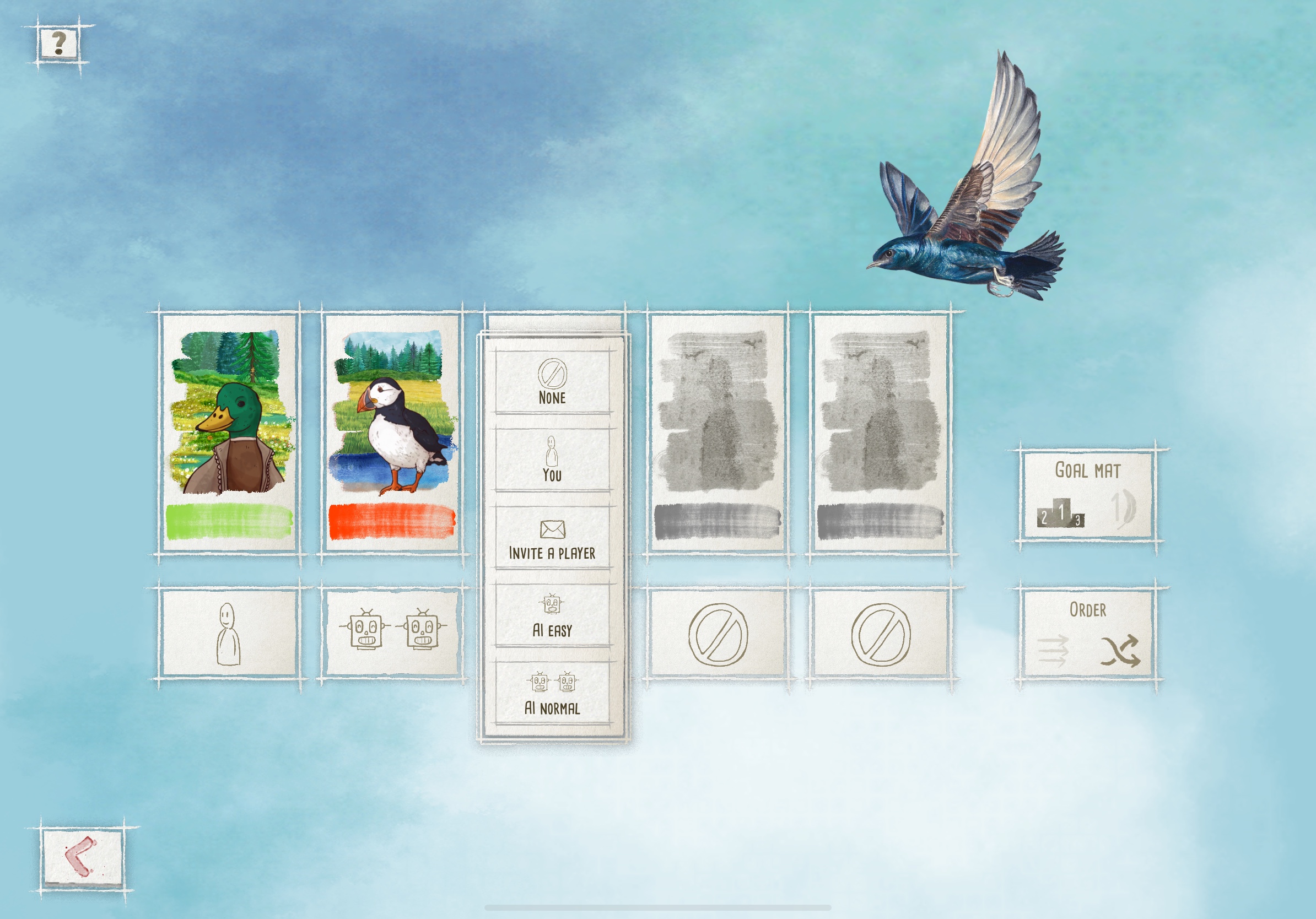 Despite the few UI-related bugs that will likely be fixed in an update, there are a few areas Wingspan falls short. The lack of iCloud save sync between devices is baffling for a game like this. Being able to start on one device and continue playing or doing the next turn on another is something I basically assumed would be in, but there is no save syncing right now. In an ideal world, you’d be able to take your Steam progress to iOS and back but there isn’t any cross progression. Cross platform online is available though. The final bummer is the lack of controller support despite Wingspan being available on both Xbox and Nintendo Switch platforms. For most people, the superb touchscreen controls will be enough, but it is disappointing not having controller support when the platform supports it and ports with controller support exist.

It is interesting that Wingspan can detect a controller and it notified me when my controller was disconnected, but will not actually let me use the controller in-game. There is partial keyboard support with WASD and enter/escape working for some things in-game. Hopefully future updates add proper support for not just controller gameplay, but also keyboard and mouse support for iPad players.

When I first discovered Wingspan, I wasn’t sure it would click with me but wanted to check it out for its art. Having now played it over the last two weeks almost daily, it is a superlative experience on iPad and a very good one on iPhone. The asking price being half of what it costs on console also helps given how good this feels on a touchscreen. The lack of cross platform progression and iCloud save sync are the biggest downsides here. Barring those issues, Wingspan looks gorgeous and it is one of the most relaxing games you can play right now on iOS. I’m definitely going to get the physical board game soon and cannot wait to play more Wingspan with friends online and when the expansions eventually arrive.