Skip to content
ASNF 2 months ago 4 min read
Tunche is an action rogue-lite game inspired by classic beat ‘em ups such as Final...

Tunche is an action rogue-lite game inspired by classic beat ‘em ups such as Final Fight and Streets of Rage with a bit of modern hack ‘n slash and RPG elements. All of that wrapped up in a beautifully animated hand-drawn world with a story set in the heart of the Amazon jungle.

You will be able to choose one of the five unique characters, including Hat Kid from the highly-acclaimed A Hat in Time!

Before talking more about the game itself, aren’t you wondering: What does Tunche mean?

Tunche is the name of a mythological creature, a being from folk tales told by many generations of peoples that live around the jungle and in many other places of South America. It is said that Tunche is a spirit that dwells deep in the heart of the rainforest and that when you get too close to it you’ll be able to hear it whistling. However, if you do, then it might already be too late for you.

In our story, things are a bit different. Tunche is still a fearsome magical being, but he is also the spirit lord of the jungle. One day, all of a sudden, the jungle is overrun by evil magical creatures. These aggressive monsters are attacking villages, kidnapping people. Tunche is considered by locals to be their master, and so everything points to him as the mastermind behind it all.

This is when four explorers, and a certain visitor from another world, each with a personal motive, decide to go into the wilds and find the beast. They will have to face many challenges, some of them born from other folk tales of Amazonian myths, and survive through four different worlds full of danger before they find out what the truth really is.

Leap Game Studios was founded in 2012 and is based in Lima, Peru.

Tunche is a very special game for us at LGS. Although this is not our first title, nor our first console launch, it is a very important project for all members of the team.

From the very beginning you will be able to use a simple melee three-hit with the use of the Square button. Each character has different attack speed and reach, so each is unique and everybody will find a playstyle to their liking. The more you fight the more your mana bar fills, and with that you get access to special attacks and Ultimate abilities. Characters specialize in different things: Rumi likes long-ranged magic attacks, while Qaru is good at aerial combos. Hat Kid is an all-rounder with some special moves that come right from A Hat in Time. 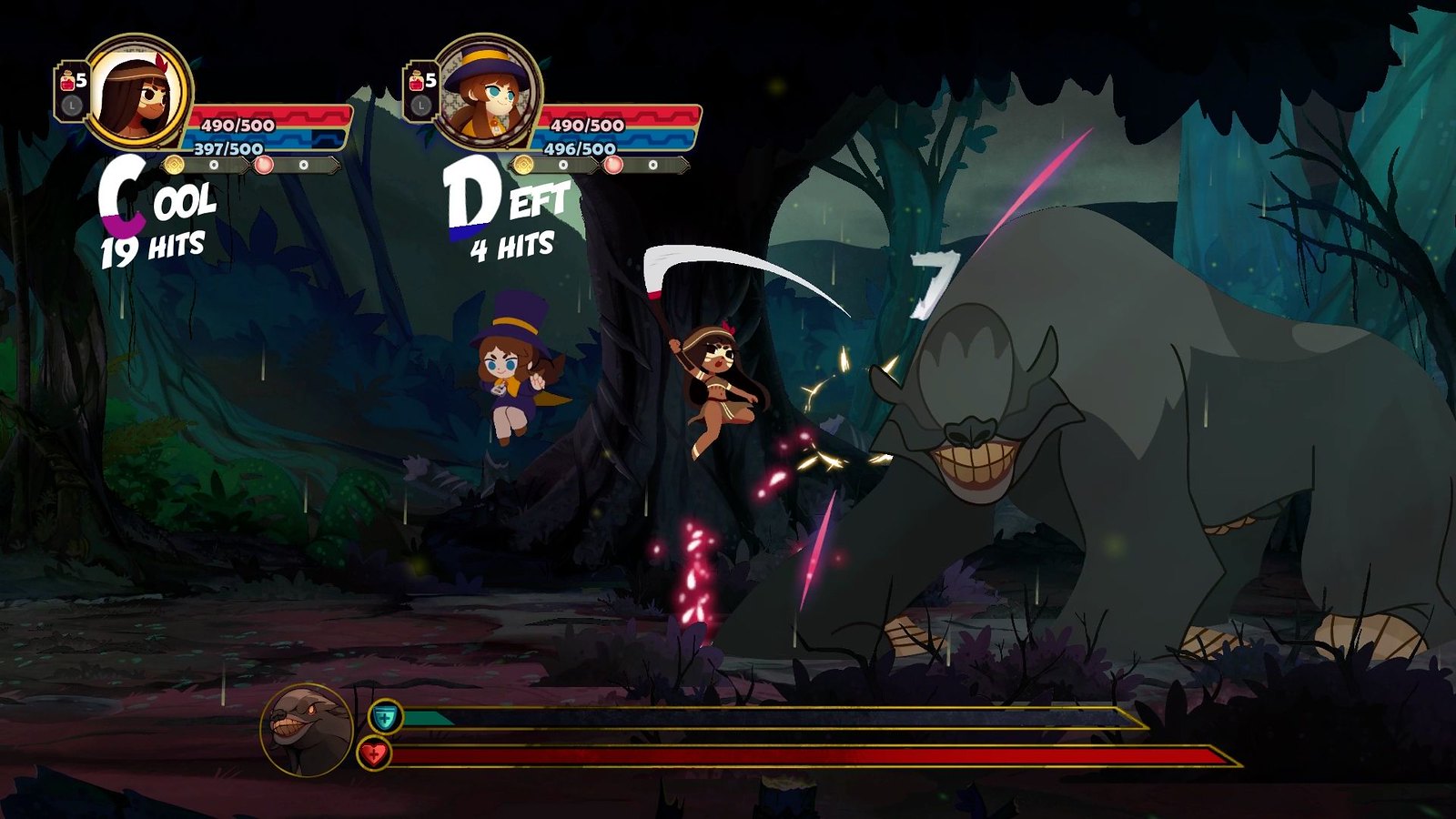 While you fight, you will also see your “Stylish Meter” grow in power and go from a basic “D” to a Super Stylish “SSS”. The better the grade at the end of a battle, the better the rewards you will receive.

Rewards are a very important part of your progression. You see, Tunche is also a rogue-lite game designed to be finished in one sitting. Even though characters retain their experience points and become stronger with each journey into the jungle, there are also temporary rewards that can give you a very strong advantage in a single session.

The most important reward comes in the form of Spirit Cores, magical orbs that grant you extra abilities such as setting enemies on fire or calling down lighting from the sky. Even though you always lose your equipped Spirit Cores every time you Game Over, you can still level them up and buy them in stores if you have enough currency from your runs.

The difference between our five protagonists doesn’t end with their gameplay mechanics and playstyle. Each character has their own story to tell, and it is told via in-game comics. They have their own goals and ambitions when they venture into the jungle and you will have to complete the story with each of them if you want to know everything about the world of Tunche and the character’s personal stories.

You might have noticed from screenshots and trailers, that Tunche has a very distinct art-style. Every single sprite in Tunche has been drawn frame by frame by our talented artists, and even though our levels have a 3D base, allowing you and your enemies to move around a space with real depth, everything has been illustrated to give the impression of a 2D art piece. 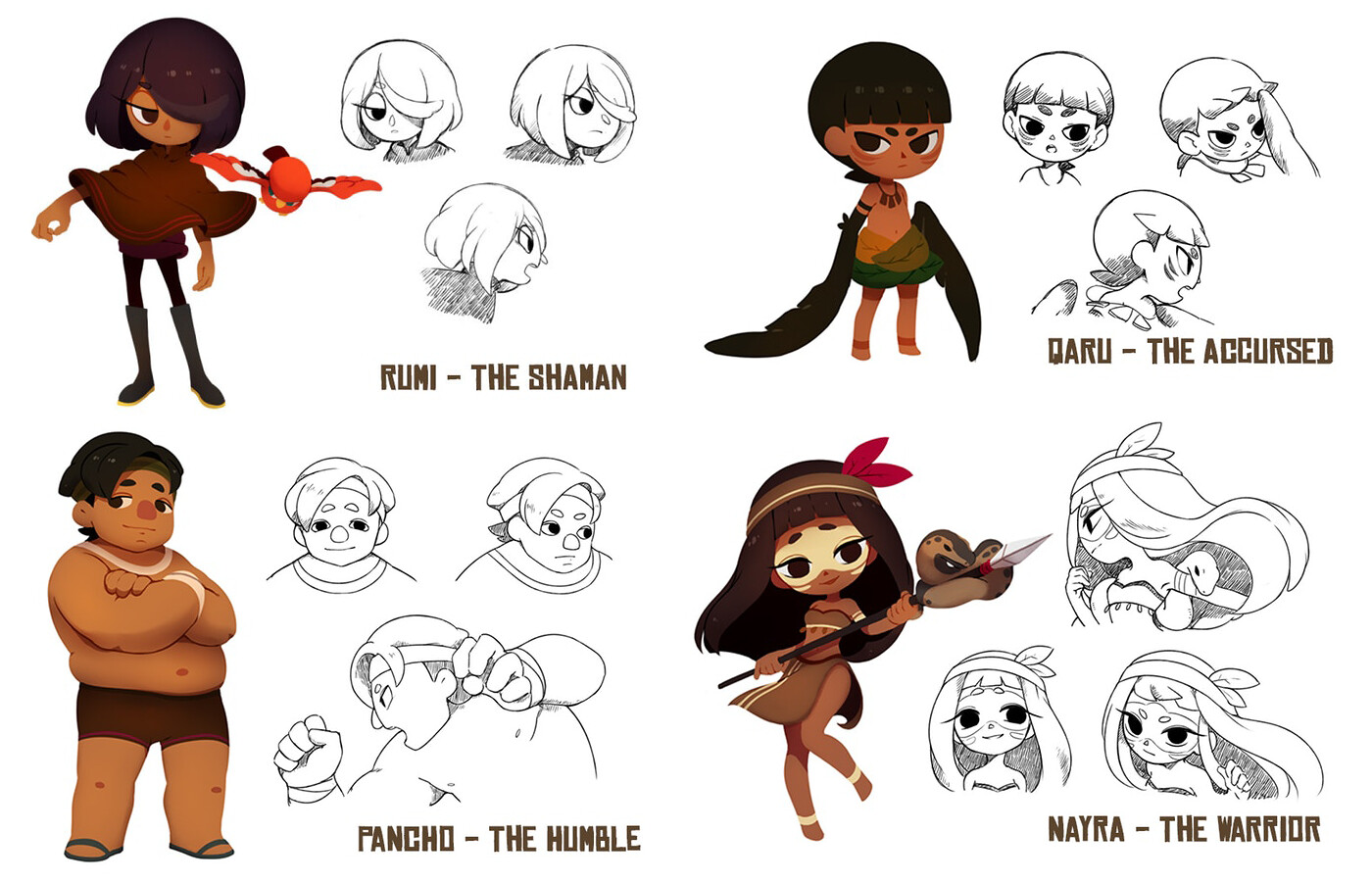 With all that said, we truly hope all PlayStation players enjoy Tunche once it arrives on March 25. We have put a lot of work and effort into bringing you the best roguelike, beat ‘em up action experience we could and took a ton of inspiration from some of the most interesting pieces of Amazonian folklore to create ‘Tunche’.