Street Fighter 6 entered the Tokyo Game Show ring and left with multiple knockout reveals worthy of a championship. We revealed details on World Tour where you can create your own avatar and truly customize your Street Fighter 6 experience. Bring that avatar into the Battle Hub and party it up with the community in amusing ways. Iconic World Warriors Ken, Blanka, Dhalsim, and E. Honda are punching their tickets into the vibrant roster of playable characters. And finally, get your hands on Street Fighter 6 with the Closed Beta. Learn more about these stadium-sized announcements below!

Your Avatar. Your World Tour. When we first revealed World Tour back in June, we said it would be an immersive single-player story mode that would push the boundaries of what a fighting game is. And here we are!

Your first destination will be Buckler Security, located in Metro City. This company trains new recruits in security detail. Here, Luke will act as your coach as you sign up for the basic training course, and this is where your story begins.

World Tour offers the most robust Avatar Creation feature that stretch the limit of what a character creation tool can do. There are tons of customization options to reflect your personal style and flair.

Then go into even more detail with categories like Hair, Eye Shape, Iris, Eyebrows, Nose, Mouth, Ears, Facial Hair, and more! Each of these categories then contains a multitude of sliders that can change your avatar with the finest detail – we’re talking cheek depth, jaw length, and even creating an ombre effect with your avatar’s hair! You can also change your avatar’s Gear so they always have the latest drip as they’re roaming the world. Visit shops to buy Gear for your wardrobe so you can strut the latest fashion trends or stick to your own style. You can check and change which styles you’re using and what Gear you have equipped via the Gear section of the Status menu. Categories include Head Gear, Upper Body Gear, Lower Body Gear, Foot Gear, and Gear Sets. But gear isn’t just for looks. Different gear affects your strength and stats, so be on the lookout for which ones work best.

Luke (call him “Coach”) will be your World Tour guide as you begin your adventures in Metro City. As you progress through the story, you’ll meet Masters who will take you under their wing and teach you their style and attacks. As your bond with them grows stronger, you can also learn Master Actions from their repertoire like a Shoryuken from Ryu and a Spinning Bird Kick from Chun-Li. Use them to open a battle and you’ll kick things off with an advantage or some of them can even be used to destroy wooden boxes and barrels, or leap to faraway platforms. Master Actions, while convenient, do consume Drive Gauge, so always keep an eye on how much you have left in the tank.

During your travels, you’ll face a number of trials and challenges. You’ll come across opportunities to prove yourself in street fights. As you grow stronger, you’ll face even stronger opponents. In Metro City, long-time fans will find familiar locations like names from the Street Fighter universe as the city’s signature landmarks. Make sure to explore around every corner. You never know what surprises lie in wait for you!

We’ll have even more information on World Tour in the future, including what else you can do to immerse yourself in this new foundational mode in Street Fighter 6. Take your avatar from World Tour into the Battle Hub, another core mode in Street Fighter 6, where you can gather with other players to communicate through various means. Fighting Ground online features are also accessible in the Battle Hub.

One Battle Hub can host up to 100 players at the same time! Players can use emotes or chat to communicate with each other. Of course, make sure you check the Hub Good Shop to show off your fashion when you’re out on the floor!

There are a host of Arcade Cabinets that you will find in the Battle Hub. Take part in arcade-like Battle Hub matches on cabinets that are placed back-to-back. A match will begin when two players sit on both sides. Having audiences change everything…and turns a mere fight into a thrilling spectacle. Spectate a Battle Hub Match, and bear witness to glory.

Head over to Game Center cabinets to play various Capcom classic arcade games like Street Fighter II and Final Fight where you can also show off your skills to compete with others for a high score!

Don’t forget to check out various events that are ongoing or scheduled at the Event Counter. Tournaments also held periodically in the Battle Hub. This would be a great time to turn on the commentary feature and get the feel of a real tournament!

Jam out at the DJ Booth in the Battle Hub by picking your favorite tunes and setting the dance floor aflame!

Well. that’s everyone’s Battle Hub! You may be able to have some quality time in here soon…? 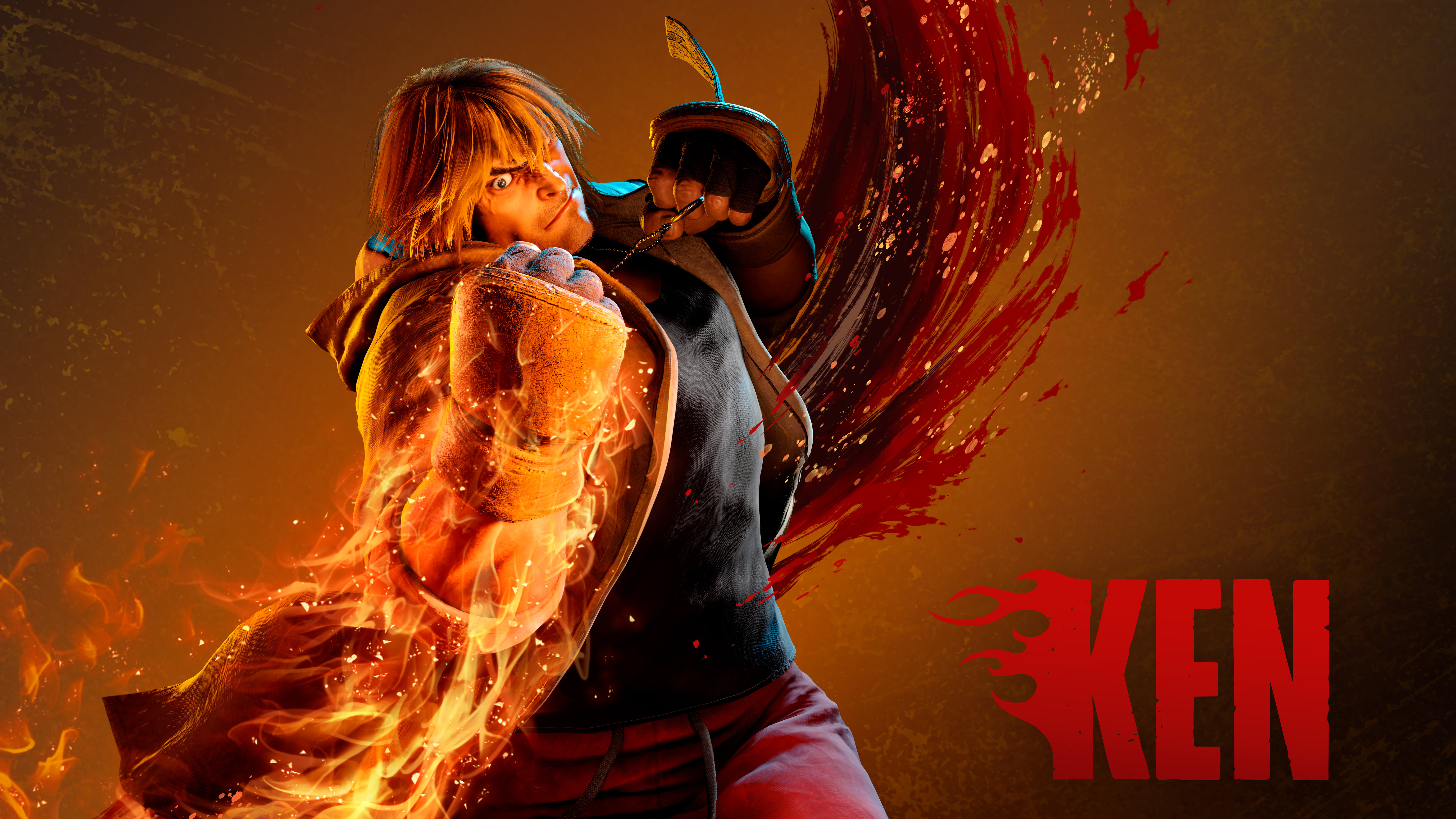 We know the community has been waiting for this one (yes, we’ve seen the memes). Ken Masters is a former US National Fighting Champion and ex-VP of the Masters Foundation. Accusations of orchestrating a criminal plot have forced Ken to abandon his family and business to go into hiding.

As a legend in the Street Fighter series, Ken’s core move set remains similar to his previous iterations. Hadoken, Shoryuken, and Tatsumaki Senpu-kyaku? Check, check, and check. His Dragonlash Kick and Sprint from Street Fighter V are also now special moves rather than V-Skills. New to Ken is the Jinrai Kick, a forward-moving roundhouse kick that can be followed up with three different options to reflect Ken’s quest to clear his name. 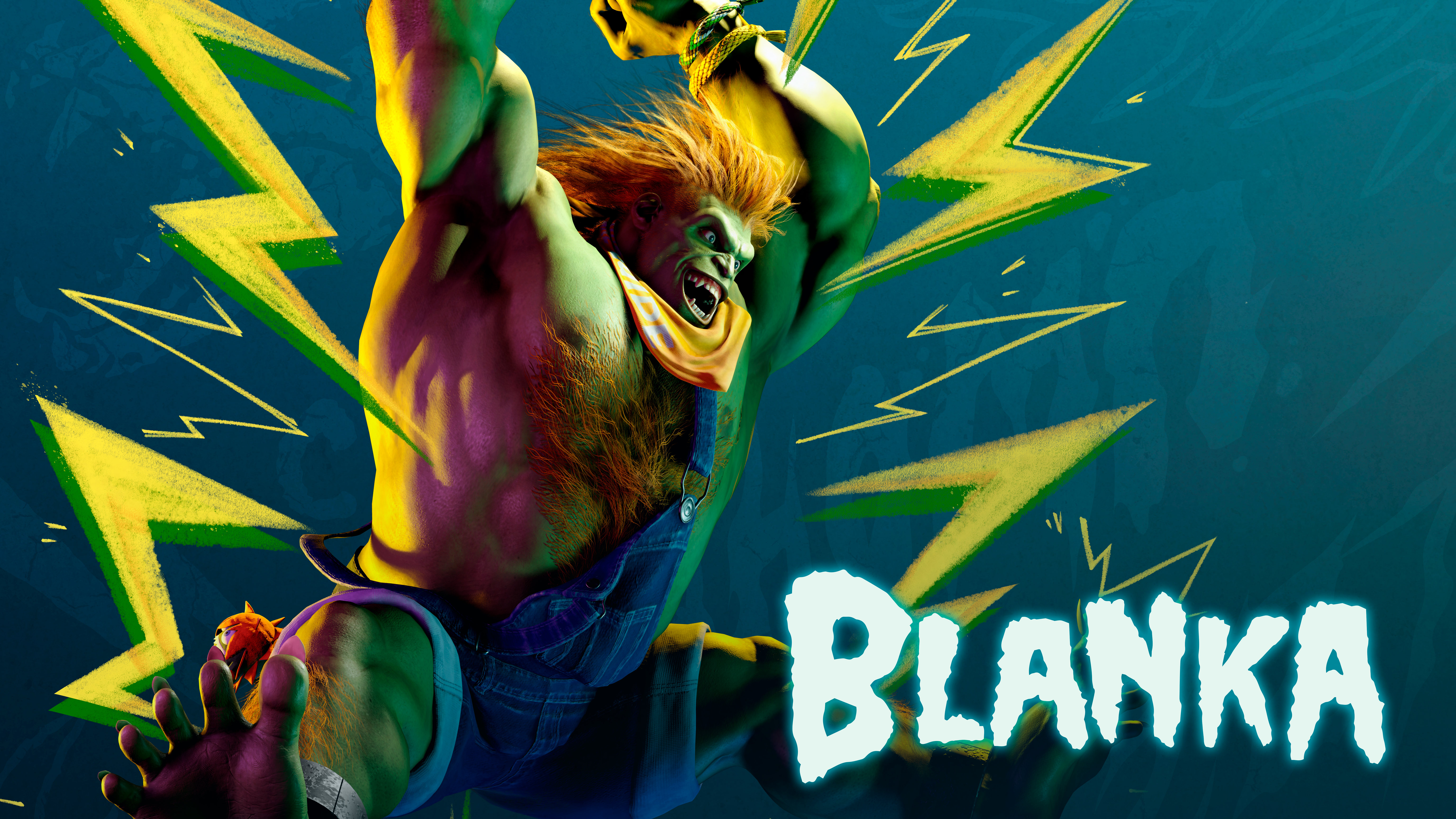 A kindhearted defender of nature, Blanka has become an adventure tour guide, confident his intimate knowledge of the jungle will serve as a springboard to fame—and a comfortable life for his beloved mother. You can visit Blanka’s tour in his Ranger’s Hut stage by the river where village life is set on a lush green backdrop.

Blanka wouldn’t be the wholesome beast he is without his usual Electric Thunder and various Rolling Attacks. But his time trying to sell Blanka-chan dolls in Street Fighter V has altered his move set due to the surplus of the adorable plushies. He can now use Blanka-chan Bomb to toss a doll to the ground. When Blanka touches it with an electrical special move, the cute little thing will run towards the opponent in a mad rage and explode. 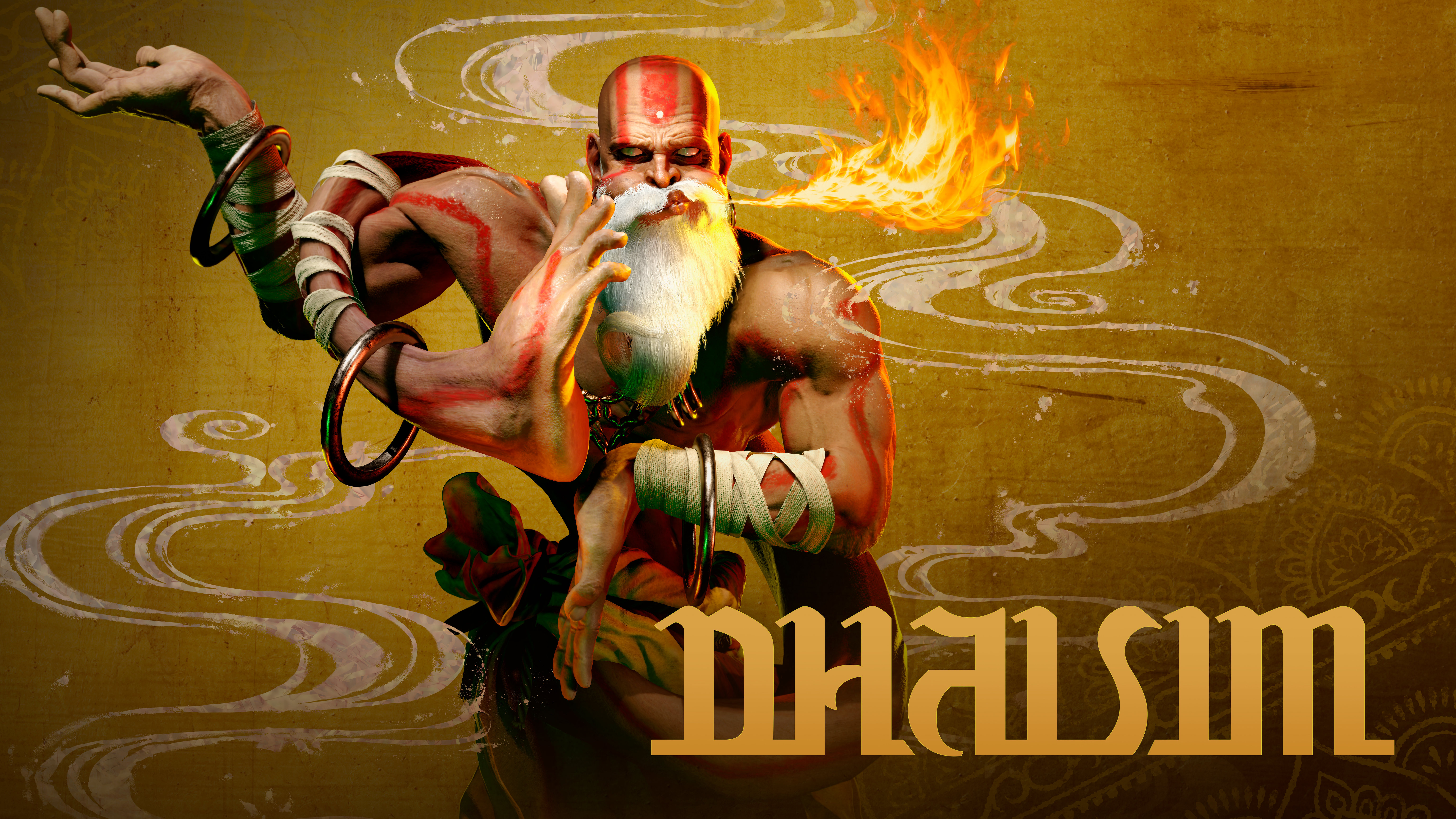 Dhalsim is a monk and yoga master who has served as a guide for countless suffering souls. He prefers to avoid conflict when possible, but his innate hatred of evil compels him to dispense stern justice. The elephants return in the Dhalsimer Temple stage where monks study yoga amongst the candles in a peaceful setting.

Dhalsim channels his familiar fire techniques from past games, but has also mastered alternate ways to release the flames to cover all angles. His Yoga Fire travels horizontally again, Yoga Arch fires the ball of flame in a similar arc trajectory like in Street Fighter V, and Yoga Comet is fired at a downward angle when Dhalsim is in the air. Yoga Flame is back as Dhalsim blows a large ball of flames in front of him while Yoga Blast blows at an upwards angle as a good anti-air counter. Additionally, Dhalsim can still teleport and float his worries away. 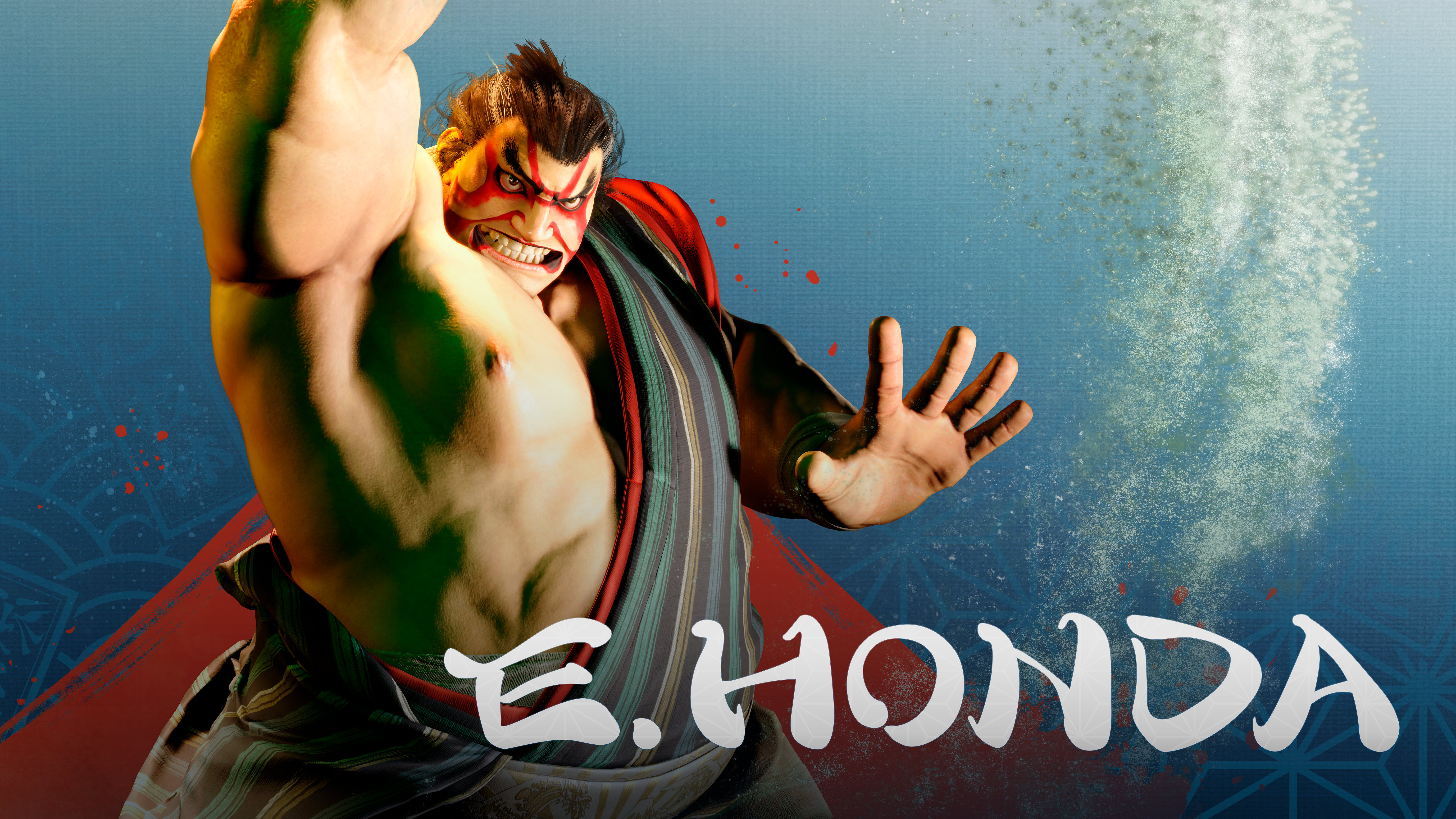 A sumo wrestler looking to bring the sport to a worldwide audience, E. Honda has the skills of a Yokozuna, but his constant globetrotting has prevented his promotion to the rank. He’s also an expert chef renowned for his mouthwatering chanko stew.

Much like the previous three World Warriors, E. Honda fans will feel right at home with his move set. His trademark Hundred Hand Slap, Sumo Headbutt, Sumo Smash, and Oicho Throw return. His two V-Skills from Street Fighter V, Neko Damashi and Sumo Spirit, are now special moves. E. Honda’s new move is Sumo Dash, where he moves forward with a traditional sumo shuffle and can be followed up with more pressure or a launcher.

Turn the volume up to Extreme Shown in our trailer revealed at Tokyo Game Show, Extreme Battle is a new addition to Fighting Ground which adds fun and unexpected parameters to your matches. Each Extreme Battle contains a Rule and a Gimmick. A Rule is the conditions that must be met to win the match. For example, you can set the Rule to “First to get five knockdowns wins!” A Gimmick on the other hand, adds an extra layer of delight. Examples are a stampeding bull that runs through the level and deals damage, a Met from Mega Man that can shock you, and more wacky surprises to amp up the excitement and challenge in Street Fighter 6. This is a mode for those who want something different from the usual fights. If you want to survive in the world of extreme battling, luck is every bit as important as technique!

The closed beta test you’ve been waiting for

It’s true! We will have a Closed Beta Test (CBT) for Street Fighter 6 from October 7-10 on PlayStation 5. The best part is that it’s cross-play enabled, just like the full game when it launches in 2023! (Note: Times may vary across regions)

During the CBT, players can face off against each other and have access to the Battle Hub to experience features including Ranked Match, Casual Match, Battle Hub Match, Open Tournament, Extreme Battle, Game Center, and Training Mode.

You’ll be able to play eight characters during the CBT: Ryu, Chun-Li, Luke, Jamie, Guile, Kimberly, Juri, and Ken. Since each of them have unique and distinct playstyles, we know you’ll be able to find a character to gel with. Keep your mind open though since we still have more characters to show you with equal amounts of personality.

Finally, two more commentators were added to the Real Time Commentary feature: Kosuke Hiraiwa and H.E.Demon Kakka. Kosuke Hiraiwa is a well-known esports caster who lends his expertise and professionalism to Street Fighter 6. H.E.Demon Kakka is the lead singer of Japanese heavy metal band Seikima-II. While they will commentate your matches in Japanese, there will be accompanying English subtitles on the screen if they are selected.

And those are our announcements from Tokyo Game Show 2022! There’s still lots to come before Street Fighter 6 launches in 2023, but in the meantime, we’ll see you in the Closed Beta Test.