Skip to content
ASNF 2 years ago 4 min read
One of humanity’s greatest driving forces is… curiosity. And that’s exactly what leads our prehistoric...

One of humanity’s greatest driving forces is… curiosity. And that’s exactly what leads our prehistoric protagonist to finding a jetpack left behind by an alien invader.

In Jet Kave Adventure, the Stone Age meets Science-Fiction. We tell the story of Kave, a chief banished by his own tribe. When you meet him, Kave wanders aimlessly through a canyon until he stumbles upon a wrecked spaceship. Instead of running away, his curiosity compels him to spy on the alien trying to fix the ship, for which he almost pays the ultimate price.

When Kave comes around, he browses through the wreckage and finds a working jetpack. He also learns about the alien’s plans of destroying the island. Between that knowledge and the newfound extraterrestrial piece of tech, he quickly turns from an exile into the only caveman who stands a chance against the alien threat…

With Jet Kave Adventure, we wanted to create a game that combines everything fans love about 2.5D platformers. So we put in a lot of skill-based action with jetpack platforming at its core. We designed challenging boss fights, clever secrets and thrilling set-pieces on top of collectibles carefully placed in a way that will test your keen eye and quick reflexes. What was the most important, though, we made sure that the gameplay has a flow – if you’re good enough, you can find a rhythm to each level and finish it practically without stopping.

While our game was inspired by prehistoric-themed platformers that we enjoyed in our younger years, it also features quite a few modern solutions. The two examples I’d like to highlight are achievements and online rankings.

They might not sound like much at first, but we put a lot of thought into making them a worthwhile addition to the game. Some of the achievements are challenging, some are secret, some are unconventional, but they are all designed to help you squeeze everything out of the gameplay mechanics. The rankings, on the other hand, let you compare your and your friends’ skill in three categories: Time, Collectible, and No Damage Challenges, thus adding a competitive layer to the platforming.

And if you’re looking for a more old-school level of difficulty, we’ve got you covered with the Arcade Mode. This classic experience introduces a number of changes to the life system and checkpoints, raising the chances of you seeing the good ol’ Game Over screen. It’s tough but fair!

Jet Kave Adventure is available now on Xbox One and Xbox Series X|S (through backward compatibility), so without further ado, I sincerely invite you to join Kave in his quest to save his island and prove his worth to the tribe! 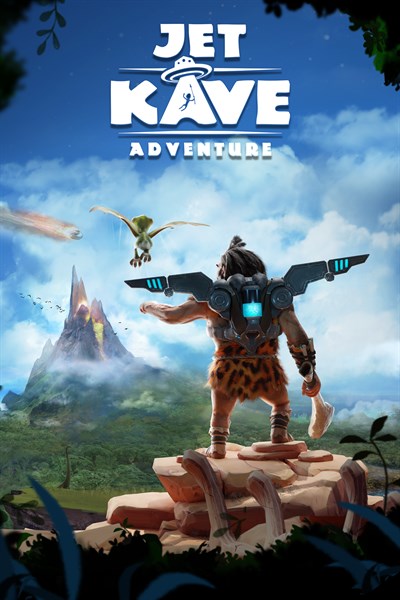 ☆☆☆☆☆
1
★★★★★
$14.99
Get it now
Xbox One X Enhanced
Jet Kave Adventure is a completely historically inaccurate yet highly entertaining 2.5D adventure platformer. Thaw out your inner caveman and join the skill-based action!

Your name is Kave, and you’re the chief of your tribe – or rather you were until now. Banished by your own people you stumble upon… a jetpack! The device turns you into the only caveman who stands a chance against “the alien invader” – a rather unlikable guy from the sky who’ll readily kick off a disastrous volcanic eruption just so he can repair his spaceship.

Begin your quest to save the whole island and prove your worth to the tribe!

• Master the jet-fueled platforming
It won’t be easy with your clumsy caveman’s movements but try and do your best!

• Jetpack through 36 colorful levels
Roam the amazing side-scrolling landscapes riddled with hazards and rich with secrets.

• Smack and whack 30 types of enemies
Fight a variety of prehistoric beasts and bosses using your trusty bone club.

• Challenge yourself in ARCADE MODE
Try the exciting arcade-like experience, where you have a limited number of lives, and getting to the checkpoint no longer replenishes your health. Plus, extra lives can be bought only between levels so if you lose them all, it means a good ol’ Game Over. It’s tough but fair.

• Reach the top of the leaderboard
Take part in Time, Collectible, and No Damage Challenges, and compete against other players to get the best possible high score in online rankings.

• Find collectibles and upgrade your gear
Return to the time when seashells were the only currency and collect as many of them to enhance your strength.

• Enjoy the unusual Stone-Fiction setting
Whether you're ready for it or not, the fate of your island now depends on you. So put on your jet-fueled device and start your adventure in a world where the Stone Age and science fiction collide.

• Collect various achievements
Some of them may seem odd, but they are all fun!