Skip to content
ASNF 12 months ago 6 min read
We are excited to announce our second installment in the Warfare series! Space Engineers Warfare...

We are excited to announce our second installment in the Warfare series!

Guided by community feedback, Warfare 2: Broadside expands and improves vehicle combat in Space Engineers. Your creations, machinations, mods, stories and visions of the world of Space Engineers helped drive vision of war. Today, we deliver one our biggest updates ever!

Warfare 2: Broadside offers new ways to engage with the world of Space Engineers, both on planets and in space. Defending against pirates, assaulting a freighter, lunar tank battles, or a breakneck dogfight through the canyons of Pertram, we believe this update will change the way you play.

As with our previous updates, this DLC and update will be released on all supported platforms simultaneously. We want you to enjoy Space Engineers on your platform of choice!

While war is the theme, we mustn’t forget that this is Space Engineers, and thus “building and creativity” remains the center of the Space Engineers universe.

With this update, we are introducing a series of quality-of-life improvements as well as entirely new mechanics.

A true rework of engineer-based combat could hardly be called complete without an arsenal of specialist weapons, suited for every battlefield condition.

Included in this massive update is a staggering array of new weapons! From massive battleship cannons, like the Artillery Turret, Assault cannon, or Autocannon, you have never had so much firepower at your fingertips. Already introduced, the devastating Railgun. Featuring an incredible 2k range, and potent depleted uranium sabot, the railgun can be mounted on either large or small grid vehicles allowing for truly versatile designs.

While firepower may be the focus, we have not forgotten our engineers. Warfare 2 delivers a new series of cosmetic DLC visions of iconic Space Engineers blocks. Hangar door variants, new variants of the classic Rocket Launcher and Gatling Gun, an incredible new reactor and a modular Ion Thruster variant that is sure to impact design choices for years to come.

Warfare 2: Broadside simply wouldn’t be complete without a custom battlefield for combat testing. The “Asteroid Armory” is a prebuilt conflict zone. Go solo and engage in a bit of piracy! Join the Red faction, take command of Big Red, and hunt cargo ships! Use the Asteroid Armory as a weapons test platform, blasting everything in sight! This “showcase” provides a testbed for the new weapons as well as access to both of the iconic red and blue ships!

These changes include the all new “Target Lock” system, weather improvements, armor penetration mechanics, beacons as jump targets and of course, ammo and tank detonations. Now, planning the location of hydrogen stores or ammo stockpiles is more important than ever before. A carefully placed shot could cripple your vessel so plan accordingly!

In addition to this series of quality-of-life changes and improvements we have also made a large number of community requested changes to the modding API. These changes open the door to new possibilities from our modding community. We are excited and can’t wait to see what the community comes up with next!

Warfare 2 doesn’t just focus on the combat though, it also includes new blocks to outfit your base, space station, or fortress. Prepare your defense or lay siege like never before!

Similar to our previous major releases, we hope you will take this opportunity to support the continued development of Space Engineers. This DLC pack consists of cosmetic items that enrich your game visually. None of the features in this package provide any advantage to players who purchase this DLC.

This update includes both free features as well as the option of paid DLC. Functional items that directly impact game mechanics are always offered as a free upgrade. Cosmetic upgrades are included as paid DLC content. This is how we structure all of our major DLC releases and we hope you enjoy it. 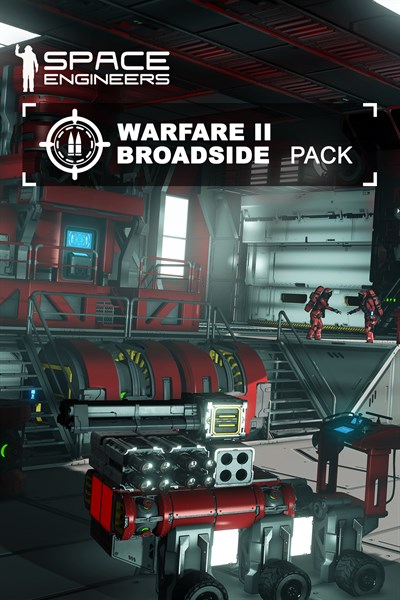 This content is not “pay to win” and the owner of the package has no advantage against other players. If you decide not to purchase the “Wasteland” pack, but you want to play with friends or other players who did buy Wasteland, you will still be able to join a multiplayer game or server with them and participate.

Warfare Ion Thruster
A refreshing new vision of the Ion Thruster. These new thrusters are modular, allowing for more complex and imaginative arrangements. These thrusters are available for both small and large grid ships and come in a variety of designs.

Warfare Gatling Gun
A modernized gatling gun design. With extended barrels and a heavier feel. The spinning barrels of a gatling gun have never looked so good.

Searchlight
An articulated spotlight that behaves like a turret. Able to track targets at limited range. Comes fully equipped, with all the standard spotlight features, including custom colors, blink settings, intensity slider etc..

Passenger bench
Troop carrier style passenger seat. Multiple seats can be arranged as a bench. Designed to seamlessly fit together and provide seating for multiple engineers.

Light panel
An alternative to existing lighting solutions. Works well as ceiling decoration with passage blocks. Designed with a small profile for tight spaces. May also double as a disco dance floor!

Helm
A new take on the cockpit. A true command station. Give orders, or take them, in style. “Helm 108!”

Warfare Battery
Charge your railgun with this new, stylized battery. For all your power needs.

Sliding Hatch Door
A single large bulkhead door. This heavy duty, industrial style door has only a small porthole for viewing. Perfect for keeping the air in, or something out…

Shark mouth helmet skin
For the hunter, circling its prey.

“Rock paper scissors” emotes
A "pvp" emote for deciding who needs to go on the next mining run or take point in a firefight. Randomly selects and shows one of the rock, paper, or scissors animations. Can also show a specific animation with the /rock, /paper, /scissors chat command.