Skip to content
ASNF 2 years ago 8 min read
“When war calls, industry answers!” We are excited to announce our second update in the...

We are excited to announce our second update in the new Warfare series!

Heavy Industry focuses on the engineering, production, and logistics side of conflict, as well as bringing a series of new quality-of-life features to Space Engineers. Heavy Industry expands your creative possibilities, delivering one of our most expansive DLC’s with nearly 100 new blocks and block variants!

As with our previous updates, this DLC and update will be released on all supported platforms simultaneously. We want you to enjoy Space Engineers on your platform of choice.

Heavy Industry includes new blocks to outfit your base, space station, or fortress including the new “Armor Panel”. Armor panels come in a wide selection of variants and were designed with multiple uses in mind. Sheath a vessel in armor, use them as interior walls! Also included in this update is the tiny block with a huge impact, the small grid small merge block. A community request, this tiny merge block makes an entirely new range of creations possible.

Of course, our focus on industry would not be complete without visiting some classic themes of industrial design. Structural beams and pylons have been added as well as an entirely new variant conveyor system, provided in both small and large grid variants.

We are excited to introduce a new starting scenario “Petram Orbiter”! Positioned high above the scorching deserts of Patram, this asteroid outpost is fully fitted for a trip to the surface or exploration of the nearby asteroid field. Investigate this tiny industrial complex and take advantage of the provided manufacturing facilities or strike out and explore.

Heavy Industry provides you with new choices in production, manufacturing, and design. This is a continuation of our Warfare content and our exploration into conflict in the Space Engineers universe. This update also features some major quality of life improvements with a comprehensive overhaul of the power & break toggles.

The default behavior for the parking and power systems meant that any time one of these systems was toggled, ALL attached grids would also toggle. This could cause unexpected behavior and often resulted in a great deal of clang, frustration, and occasionally a new invention.

To combat this, both the power system and braking system have now been improved upon by adding more detailed controls, this includes changing the core functionality of these defaults as well as adding new individual toggles to many blocks.

We feel that this higher degree of control, and changes to the basic functionality of the break and power toggle, will make creating simpler where it needs to be, and more nuanced where you want it to be.

Warfare may be thought of in terms of battles, and battlefields. The engineer knows that long before the first battle, it is logistics, manufacturing, and the science and engineering that supports it, that determines the victor. Prepare for war!

Similar to our previous major releases, we hope you will take this opportunity to support the continued development of Space Engineers. This DLC pack consists of cosmetic items that enrich your game visually. None of the features in this package provide any advantage to players who purchase this DLC.

This update includes both free features as well as the option of paid DLC. Functional items that directly impact game mechanics are always offered as a free upgrade. Cosmetic upgrades are included as paid DLC content. This is how we structure all of our Major DLC releases and we hope you enjoy it.

It is a sandbox game about engineering, construction, exploration and survival in space and on planets. Players build space ships, wheeled vehicles, space stations, planetary outposts of various sizes and uses (civil and military), pilot ships and travel through space to explore planets and gather resources to survive. Featuring both creative and survival modes, there is no limit to what can be built, utilized and explored.

Space Engineers features a realistic, volumetric-based physics engine: everything in the game can be assembled, disassembled, damaged and destroyed. The game can be played either in single or multiplayer modes.

Space Engineers is inspired by reality and by how things work. Think about modern-day NASA technology extrapolated 60 years into the future. Space Engineers strives to follow the laws of physics and doesn't use technologies that wouldn't be feasible in the near future.

Space Engineers concentrates on construction and exploration aspects, but can be played as a survival shooter as well. We expect players will avoid engaging in direct man-to-man combat and instead use their creativity and engineering skills to build war machines and fortifications to survive in space and on planets. Space Engineers shouldn’t be about troops; it should be about the machinery you build.

Single-player – you are the sole space engineer
Multiplayer
– Creative and survival mode with your friends
– Cooperative and competitive
– Privacy customization: offline, private, friends only, public
– A host on Xbox One and Xbox One S supports 2 player multiplayer (lobby), 1 host + 1 client
– A host on Xbox One X supports 4 player multiplayer (lobby), 1 host + 3 clients

Cargo ships – auto-piloted vessels (miners, freighters and military) that carry ore, ingots, constructions components and other materials from sector to sector. They can be looted but beware, they often contain booby traps!
Oxygen – take off character's helmet, generate oxygen out of ice by using the oxygen generator
Hydrogen – hydrogen thrusters, hydrogen tanks and hydrogen bottles
Factions – create and join factions, determine ownership of blocks and manage the relations between them (hostile/ally).
Blueprints – save your ship or station on a blueprint and paste it into your game
GPS – create, send, receive and manage GPS coordinates in the game
Voxel hands – shape and form the asteroids and change their material (creative mode only)
Sounds – realistic and arcade mode

How to Play
Start by watching this video tutorial:http://www.SpaceEngineersGame.com/how-to-play.html

Performance Notes
The performance depends on the complexity of your world and the type of your Xbox. Simple worlds run smoothly even on old Xbox, but a more complex world with rich object interactions could overload even XBox One X. 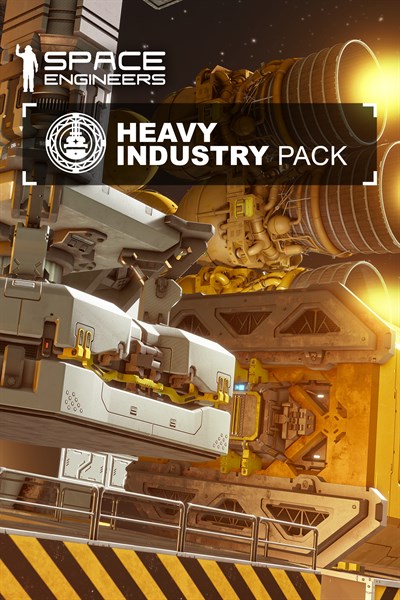 Beam Blocks
A collection of industrial style beams for structural support and exterior decoration. The Industrial beam, 10 variants in both large and small grids.

Cylindrical Column
A new column, offered in both small and large variants, designed to reinforce your starbase, starship, or underground fortress.

Large Cargo Container Reskin
A new, rugged, industrial style cargo container for all of your shipping and storage needs.

Industrial Refinery
A new, highly accessible version of the refinery.

Industrial Assembler
A new, highly accessible version of the assembler.

Hazard pattern armor skin
Beware, Danger, Caution. A hazard skin for all of your industrial creations.