The Shin Megami series has always reflected the darkness and cruelty of the world we live in, offering a reminder that the odds are often stacked against us, and unfair circumstances can cause great loss. But it also captures the beauty of rising up against those daunting challenges to stand tall – even when things seem impossible, we somehow persevere. That’s what makes the Shin Megami Tensei franchise shine, but the road to these victorious highs is filled with demoralizing lows. Voluntarily putting your energy into something that requires extra fortitude, commitment, and patience may not seem that appetizing at first glance, but no game has made me feel the rush of victory and satisfaction of testing my skill quite like Shin Megami Tensei V.

SMT V sticks close to the franchise’s roots, meaning if you’ve played any entry in the series, you know what to expect: confronting a world in ruin, taking on extremely challenging bosses, and feeling the rush of getting more powerful by recruiting demons to fight at your side. Shin Megami Tensei V is content giving fans more of the same while making a few improvements along the way, mainly in the scope of the world and customization available for your protagonist and demons’ skill sets. These are worthwhile enhancements, and the core formula remains wildly entertaining, but I’m disappointed that Atlus didn’t take more risks and shore up more of the series’ weaknesses, such as confusing map layouts, archaic save points, and maddening difficulty spikes.

Even with these frustrations, the stellar gameplay and progression loop kept me engaged. The turn-based combat is at its best in SMT V, and it’s reminiscent of III’s Press-Turn system. It requires a lot of thought to optimize your turns, which comes down to a mix of buffs/debuffs and exploiting elemental weaknesses. Watching your bonus actions pile up each turn by landing critical strikes or hitting an enemy’s weaknesses is a delight. Special “Magatsuhi skills,” which can be used once you fill a gauge by doing things like blocking or landing attacks, only add to the fun. These special skills drastically change the tide of battle, doing everything from refilling your party’s MP to guaranteeing critical strikes. I experimented more than I ever have with finding complementary skills to increase damage, and I loved coming up with new tactics based on my demons’ powers.

SMT V is a challenging game. At times, you will likely die and ultimately lose progress. I relished the tension of trying to stay one step ahead of the enemy and improving at every turn. A lot of your success hinges on demon recruitment and creating an ideal party for each area. Demon negotiation, which has you selecting dialogue options and presenting gifts to sway enemies to your side, is a guessing game at times, as demons can be fickle and unpredictable, and I found it hard to anticipate their desired responses. You can eventually unlock a skill that gives you a second chance if you fail, but the moon phase also alters their behavior and likelihood to join you. For instance, a full moon may be too bright for them, so they won’t negotiate. Other times, a new moon offers the chance to give them less money or items to join my side, or they may join on the spot, unprompted. Getting demons felt less like a hassle than in previous entries due to these additions.

Demon fusion, which allows you to combine the demons you recruit for better ones, is extremely satisfying. I love besting my last creation and deciding which skills to pass on to them. Atlus added more customization here, with a new feature called essences. Once you gain a demon’s essence, you can transfer its skills to other demons or your protagonist. The latter can also gain a demon’s affinities. For example, if you find a demon’s essence that blocks or reflects multiple elements, your main character can inherit those for the upper hand in battle. It seems like a small thing, but it can make a big difference in difficult fights. I also enjoyed how it allowed me to pass on skills to newly-recruited demons who only had a few abilities.

The demon fusion system is what makes the grinding tolerable, as there’s great reward for leveling up in battle. Whether your demons are gaining powerful abilities or your main character opens up new fusion options, I enjoyed the thrill of reaching these milestones. However, this doesn’t excuse SMT V’s nasty difficulty spikes toward the end of the game, and I felt forced to put my progress on hold just to grind. But there is something to be said about the satisfaction of coming back stronger. What SMT V does really well is provide satisfaction when you fuse a highly powerful demon that just crushes a boss. However, in the next big battle, they may be utterly useless. You can never depend on one demon and must constantly fuse to get the best, most balanced party possible.

Another area that impressed me was the expanded exploration, with a newfound verticality to the world that has you platforming your way to discoveries. I was compelled to scour every inch of each area and found worthwhile rewards for doing so, such as statues that raise all your demons’ levels and special bosses/quests. In addition, hidden throughout the world in hard-to-reach places are creatures called Miman. Collecting these little fellows grants you some of the best items in the game for improving your party. I just wish the areas you explored were more visually impressive and easier to navigate. I often felt like I was searching for a needle in a haystack to find a well-hidden path. The game has a few short dungeons, but they’re hit-or-miss. I hated one that required you to use fans to blow your character to certain ledges as a missed ledge meant starting from the beginning, but I enjoyed a later dungeon that had you figuring out a path by stopping time and entering doors in the right order.

The narrative is another area begging for improvement. I love the compelling subject matter of SMT games, as they present philosophical conundrums about the world, but the execution often feels haphazard. Shin Megami Tensei V is no different. You play as a modern-day student who gets transported to an alternative apocalyptic version of Tokyo called “Da’at” after an earthquake. From here, you earn special powers to survive in this dangerous landscape and learn that not only is the future of Tokyo in jeopardy, but there’s a war waging between the angels and demons.

It could be the end of the world as you know it, and like past SMT games, the power is in your hands to save it and also decide how it should function going forward. Do you maintain the status quo, shake up the current structures in place, or tear it all down to create a superior society? These are interesting questions, but the game presents them in such a humdrum way, with sparse, cryptic exposition and painfully slow pacing. Characters represent different philosophies, spanning law and chaos alignments, on how you reshape the world, but they don’t offer much explanation or reasoning. In fact, by the time I got to this big decision, I didn’t feel like I had a compelling choice to make. Everything in the game leads to this pivotal moment, and I felt like I was blindly throwing a dart at a board when selecting my answer. At the very least, the path I selected had some interesting revelations. I like how SMT V never wavers from its dark tone and tries to be more succinct, but for all you go through in besting the highly formidable bosses, more rewarding scenes would go a long way.

If one thing can be said for SMT V, it’s that it demands the player give their best at all times. There is no sleepwalking or blindly spamming attacks through battles; you must think through every move and constantly weigh risk versus reward. For someone who plays a lot of RPGs, this is a refreshing challenge, but it is also exhausting. Still, I can’t deny the feeling that washed over me as I saw the credits roll, especially after taking on a seemingly endless spawn of bosses to get there. I felt on top of the world, like I had earned the right to define it; I wish making the actual choice was a little more satisfying. Still, Shin Megami Tensei V makes smart improvements to its already strong core, creating an entertaining and rewarding journey I won’t soon forget. 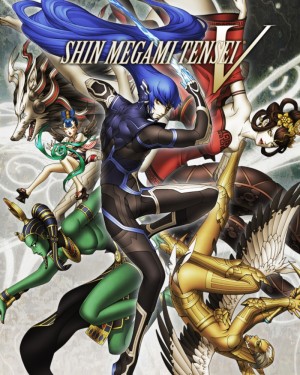 Concept: Recruit demons and gods to withstand great challenges and save Tokyo from ruin

Graphics: The striking demon designs look the best they ever have, oozing with creativity. The bigger backdrops and added verticality are welcome additions but aren’t that impressive to explore

Sound: Minimal voice acting gets the job done, but the music often feels repetitive. That being said, the different demon noises add great tension, keeping you on high alert

Playability: Multiple difficulty levels make the journey more approachable, but the game doesn’t onboard new players well. The mechanics seem simple on the surface, but have a lot of intricacies to master

Entertainment: Shin Megami Tensei V enhances its formula with expansive areas and more ability customization. The result is a mostly entertaining ride, albeit with a few bumps along the way