Skip to content
ASNF 3 weeks ago 2 min read
Remedy Entertainment is keeping busy following the release of the PlayStation 5 and Xbox Series...

Remedy Entertainment is keeping busy following the release of the PlayStation 5 and Xbox Series X/S versions of Control. Announced in a blog post written by Control Director Mikael Kasurinen, Remedy has inked a new deal with 505 Games to expand the Control franchise into places it hasn’t gone before including a spin-off focused on multiplayer and a new high-budget Control down the road.

Kasurinen establishes why the team is bringing Control into a multiplayer experience: “Control is first and foremost a world, a place for multitudes of stories, events, and characters. A place where unexpected, strange, and extraordinary things occur. We kicked it off with Jesse’s entry into the Oldest House, but there is more to this world. Oh, so much more.”

“Project Condor” is the code name for this new multiplayer title set within the Control universe, though there’s not many details on what the game actually is yet. Mikael’s blog only has one image hinting at what Condor might be. The picture depicts a group of four people decked out in various kinds of armor and gear crammed on a bench in a waiting room with a body bag at their feet. A battle-ready squad facing bureaucratic mundanity fits Control like a glove. 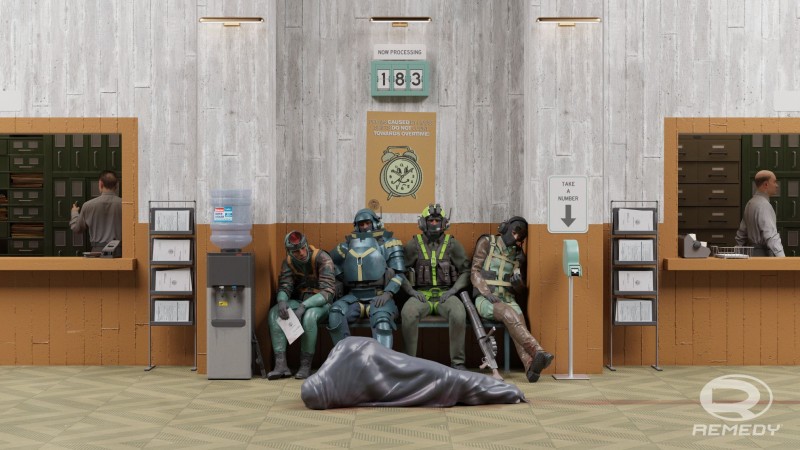 Remedy may be known for single-player experiences, but multiplayer gaming is something the studio also cares about. “There are worlds and experiences that you can access collectively, with your friends, and they can shine as brightly as any single-player experience does,” Mikael explains. He continues, “We get that there is going to be skepticism about multiplayer. But I believe we can create shared experiences without compromising the unique DNA of who we are, or the stories we want to tell. Yes, we need to re-think our angles, our techniques, our mindset, but we see it as an exciting challenge: What would a Remedy multiplayer game look like?”

That’s a great question which doesn’t get an answer in the blog post. Remedy games are known for atmosphere, mystery, the supernatural, and downright cool action, all of which would be in play for a new experience set in the Control world.

Speaking of new experiences, the lede buried deep in this announcement reveals 505 Games and Remedy “have outlined high-level collaboration terms to further expand the Control franchise with a bigger-budget Control-game.” There’s even less information on this game than Project Condor, but assume there will be even more adventures in or around the Oldest House coming.

Check out the Game Informer review of Control, or what Remedy might be up to with Alan Wake, another series connected to the Oldest House.