The best stories in video games manage to fuse narrative, art, and gameplay in a way that elevates all three. Pentiment, the latest from Obsidian Entertainment, is a perfect example of this, telling a deep, complex story about religion, truth, and history in the form of a book, which the player experiences as it’s being written. Despite a few sections with inconsistent pacing, it’s a must-play for fans of adventure games.

Pentiment tells the story of traveling artist Andreas Maler and his time spent in Tassing, a fictional town in the countryside of the Holy Roman Empire, way back in the year 1518. While Andreas’ regular routine has him working on his masterpiece or making copies of one of the local abbey’s manuscripts, he quickly becomes wrapped up in a series of local mysteries he tasks himself with solving.

Andreas can be customized with different backgrounds and personality traits to unlock different dialogue options. My Andreas was a theological scholar with a history of hedonism, but another might have studied law and spent his time enjoying nature. The dialogue options these different backgrounds unlock aren’t usually anything substantial, but it’s nice to have a sense of control over your conversations since they make up the vast majority of the game. 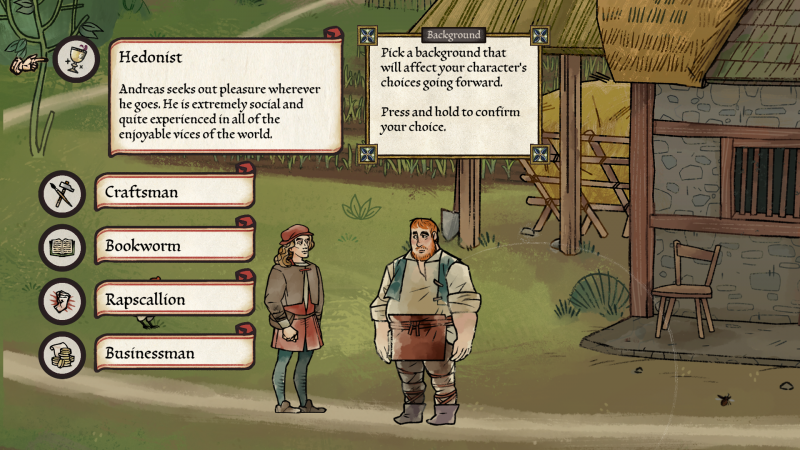 Pentiment tells its story across three acts, two of which involve investigating murders. Between the high stakes and the huge accusations, these murder mysteries are when the game is at its best. There’s only so much time to solve the case, but significant actions like eating meals with suspects or searching abandoned ruins will push you through the day, meaning you only have a limited number of chances to chase down the truth. I was desperate to learn as much as possible, but there are more leads than time to follow them. While many murder mysteries end with a satisfying conclusion, Pentiment forces you to pick a culprit with the information you have and live with the consequences of accusing them.

It’s not immediately clear whether or not you made the correct decision, but it is immediately clear how the town feels about it. Accuse a brother of the abbey, and the church resents you upon your return; accuse a beloved member of the townsfolk, and the people of Tassing might not admire you as they once did. These consequences are part of what made Pentiment’s story so impactful for me. Each act is years after the last, and the effects of your choices in the previous chapter always feel significant. The town of Tassing changes a great deal too; babies are born and grow into adults, the elderly get older and pass away, and the townsfolk adapt and change. The town is arguably more of a protagonist than Andreas.

Perhaps the strongest part of Pentiment is its adherence to its core themes. It’s a game about passing stories down from generation to generation and how the truth can become distorted over time, for better or for worse. There are rumors that Tassing harbors ghosts, conspiracy, and a dark history, but the only sources of this information are stories from the locals, and each person has a different opinion on what’s true and what isn’t. Andreas’ search for the truth is presented as a story being copied into a book, which is fitting. Like the player, he’s trying to chronicle the complete truth once and for all.

This book-like aesthetic is one of Pentiment’s most charming qualities. It starts from the first moments of a new save file, where you scrub the pages of an older book to write this new one. Characters and their surroundings are depicted as beautiful, era-specific illustrations. The menu is also a book, complete with a glossary to keep the player filled in on all the historical terms they might not be familiar with. You can press a button whenever one of these terms appears to see their definitions scrawled in the margins of the book the game takes place in.

The dialogue maintains a storybook aesthetic as well. You won’t hear voice acting; instead, the font changes depending on a character’s social or occupational status. Andreas speaks with a neat yet elaborate font, where each letter is traced, filled in, and outlined. Common townsfolk speak in plain cursive, the printer and his family speak in blocks of printed text, and the brothers of the abbey speak with ornate lettering that looks like it belongs on the inscription of a Roman statue. And as a reminder that the player is witnessing the book’s creation live, dialogue is sometimes written with a typo or two that the invisible author of the book quickly erases. The fonts are a wonderfully effective way of instilling personality into the characters of Tassing, but if you have a hard time reading cursive, they can be disabled in the settings in favor of “easy-read” fonts.

While the presentation of Pentiment’s story is beautiful, its pacing leaves a little to be desired. I adored the sections with murder mysteries, but the sections without them felt slow. The story preceding the first murder takes a while to get going, and I wouldn’t be surprised if a less-patient player bounces off the game because of it. Still, it’s far more noticeable in the third act, when the stakes noticeably dwindle before ramping back up in the final hour or so. Without going into spoilers, the third act brings significant shifts in the gameplay and story, both good and bad. At that point, it started to feel like I was watching the events in Tassing rather than playing them; I still enjoyed the story, but I didn’t get to make big decisions like in the first two acts, and there was no impending trial to push the characters along.

In these slow sections, I also started to process my issues with the game’s audio design. Most of the time, Pentiment doesn’t have music playing in the background, which feels awkward when most of the gameplay is just talking to people. The sound of the quill scratching is nice, but I would have liked to hear more of the game’s score, even if it was something sparse and atmospheric. Background characters also don’t stop their idle animations when you talk to a different person nearby, and the audio for these animations continues as well. Mostly silent conversations would be one thing, but talking to a character for two to three minutes while the only sound is the repetitive, incessant sweeping of a nearby broom had me taking my headphones off more than once.

Despite some issues with the audio and the slowness of the third act, Pentiment is a wonderfully unique storytelling experience overflowing with respect for the historical era it strives to recreate. Much like the game’s themes of stories persisting over time, I’ll be thinking about Andreas Maler and the town of Tassing for years to come.