Get ready to relive ‘90s retro survival horror with Outbreak Contagious Memories], now available on Xbox Series X|S and Xbox One via Smart Delivery. Designed to be a spiritual successor to ‘90s gaming landmarks like Resident Evil, Silent Hill, and Alone in the Dark, you’re trapped in a city ravaged by the undead – can you make it out alive? Join Lydia in her desperate struggle to escape, either alone or with a friend in co-op. Continue reading for behind-the-scenes reveals and a lot more!

The Outbreak series is all about reliving terrifying moments from the history of survival horror, and Outbreak: Contagious Memories drags you back to one of the most important eras. The game is designed to play like a narrative-focused tough-as-nails adventure straight from the ‘90s, including optional fixed camera views, strict inventory and resource management, shared item caches, limited consumable items to save, and much more. You can even optionally choose to play with old-school tank controls!

But, for those out there who may prefer a more modern interpretation of the greats, you can also choose between over-the-shoulder or first-person-shooter views with precision aiming and modern movement! This is also the first title in the Outbreak series to have full voice acting across the entire game, and it’s absolutely as cheesy as you’d expect!

Imagine a late ‘90s 3D title married with the next-gen technology of 2022, and you’ll have a pretty good idea of where our nightmare is headed. Real-time reflections and shadows, dynamic gore that sticks to the environment, and much more meet high framerates and quick load times. The environments will capture you with their dark and moody corridors, alongside a vicious thunderstorm raging all around. It’s just you and your flashlight hoping to find respite in a world burning to the ground. Your enemies will be using every advantage they can find to kill you, leaping from the shadows and surprising you just when you feel the safest.

Outbreak: Contagious Memories is the most technically advanced title in the series, and makes full use of Xbox Series X|S to power all of these great effects while still supporting great framerates, even in optional two-player co-op splitscreen! But for those of you still waiting to upgrade, you’ll find the Xbox One and Xbox One X versions of the title are tailored towards those consoles, still featuring fast load times, snappy framerates, and more bells and whistles than you’d think!

This undead epidemic is brimming with everything you’d expect in ‘90s survival horror. Experience the story mode, complete with cheesy voice acting and over-the-top-gore, as you work with fellow survivors to escape a city collapsing around you. Once you’ve survived that nightmare, jump into the unlockable bonus mode, Operation: Rabid Wolf, a hardcore arcade experience inspired by classic Resident Evil bonus modes where you’ll blast your way through hordes of the undead across a wide cast of characters, each with their own loadouts, as you fight to rescue survivors strewn around the city. Finally, you’ll spend points you earn to unlock gameplay modifiers like damage resistance, unlimited ammo, explosive ammo, and other fun modes that need to be seen to believe.

All of the content in the game is playable either in solo or in two-player splitscreen co-op. In co-op, you and your partner are on equal footing – with your own inventories, weapons and limited amount of health. You’ll need to work together to outsmart the hordes, solve puzzles, share resources, and survive. If either of you dies, it’s game over, and you’ll be thrown back to your last save point, or even worse, the beginning of the game!

The entire Outbreak series is created by a solo indie developer dedicated to helping fellow fans of the genre travel back in time to the ‘90s. The series now has seven unique entries, starting from a 2D overhead adventure in the original Outbreak,to over-the-shoulder action in Outbreak: Epidemic], and even semi-procedurally generated rogue-like adventures in Outbreak: Endless Nightmares. Experience the series at a great price with the Outbreak Palladium Collection and Outbreak Gold Collection, all of which include Outbreak: Contagious Memories!

Thank you for reading and supporting the revival of classic survival horror. Dead Drop Studios has plenty more stories to share in the Outbreak universe, as well as some fun surprises ahead that you may not expect. Stay tuned as we battle further into 2022 for more news. And, don’t forget to pick up Outbreak: Contagious Memories, now available! 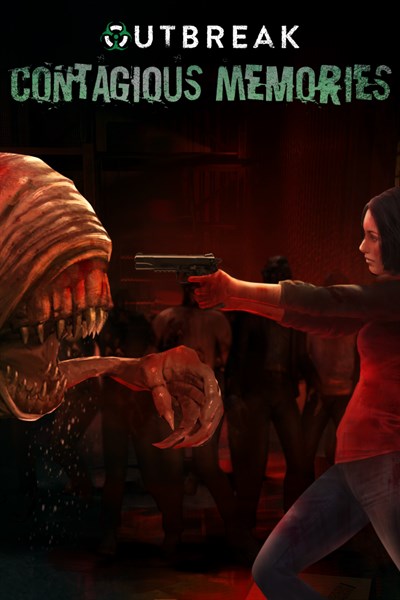 ☆☆☆☆☆
4
★★★★★
$29.99
Get it now
Xbox One X Enhanced
Outbreak: Contagious Memories is a send-up to classic 90’s horror series like Resident Evil and Silent Hill where your survival will be determined by moment-to-moment decisions, what you decide to carry, and how good you are at spotting conveniently written notes.

After being knocked unconscious, Lydia awakens in an abandoned warehouse as fellow survivors debate leaving her behind. Not one to play the helpless maiden, Lydia takes charge, forging a path through crafty environmental puzzles and hordes of the undead to figure out a way for her and her fellow survivors to escape the city.

Resources are scarce, is it worth that extra bullet to take down a zombie? Or maybe you should take a risk and try to dodge it. You will have to think on your feet and decide how best to approach every situation. A bullet saved is a bullet earned, but medical supplies are hard to come by in undead uprisings.

It’s a nightmare scenario, but you don’t have to go it alone, grab a friend and work together to escape the city in fully integrated co-op, and look at any scenario from the perspective that suits you with fully integrated 1st person, 3rd person, and fixed cameras. Escape the zombie outbreak your way!

Still hungry for more? With plenty of unlockable bonus content like Operation: Rabid Wolf, work with your friends or compete against them, whether it’s fighting through the city to rescue survivors, or to beat the main game in record time with nothing but your fists. With plenty of additional content to unlock, one run won’t be enough to see everything Outbreak: Contagious Memories has to offer.

Full co-op integration, play through the full game solo or with a friend!

Hordes of undead, mutated beasts, and monsters with lots of extra teeth.

Unlock Operation: Rabid Wolf, an arcade bonus game where you fight through the city alone or with a friend rescuing survivors.

Xbox, Doritos, and Rockstar Energy Drink Give Away Game Pass, Prizes, and DLC

The PS5 features bringing A Plague Tale: Requiem to life

Xbox, Doritos, and Rockstar Energy Drink Give Away Game Pass, Prizes, and DLC

The PS5 features bringing A Plague Tale: Requiem to life

Death Road to Canada MANDIBLE and NERVE Updates Arriving Together for Mobile, Extended Halloween Event Coming to PC This Month