Skip to content
ASNF 12 months ago 2 min read
Wii Sports revolutionized Nintendo’s console business when it came bundled with every Wii console. That...

Wii Sports revolutionized Nintendo’s console business when it came bundled with every Wii console. That compilation disc included five rudimentary sports titles and showed players the capabilities of the Wii’s then-groundbreaking motion controls. It was an immediate smash hit, attracting demographics that extended far beyond Nintendo’s typical gaming audience. However, while the Nintendo Switch has now outsold the wildly popular Wii and it has its fair share of wide-reaching smash hits like Mario Kart 8 Deluxe and Animal Crossing: New Horizons, the console/handheld hybrid hasn’t had another transcendent game experience like the original Wii Sports. Now, with the aptly named Nintendo Switch Sports, fans of Wii Sports can relive past glories.

Nintendo Switch Sports gathers six sports and lets you control them using the motion controls of the Switch Joy-Cons. Tennis, bowling, and chambara (swordplay) all return to the Sports series, while this iteration adds soccer, volleyball, and badminton. If you buy the physical version of Nintendo Switch Sports, you also receive a Leg Strap accessory that allows your Joy-Con to track your leg, which can be used in soccer’s Shootout Mode. 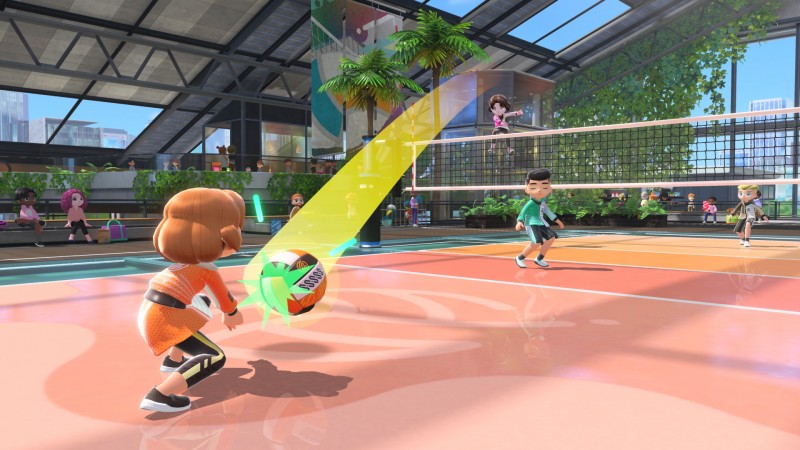 You can play in-person with family and friends like the original Wii Sports or play online in ranked matchmaking or against friends on your Nintendo Switch Online list. Two free updates were also announced for Nintendo Switch Sports. The first one, coming this summer, adds the ability to use the Leg Strap peripheral for the main game of soccer. This fall, another free update will add golf to the collection of sports you can play.

Nintendo Switch Sports arrives on Switch on April 29. If you’d like to check it out before then, Nintendo is hosting a special online play test from February 18 to 20, where Nintendo Switch Online subscribers can play bowling, chambara, and tennis.