Skip to content
ASNF 2 months ago 6 min read
Summary Coming to Xbox One, Xbox Series X|S, Windows PC, and with Game Pass on...

Enjoy silky smooth action on Xbox Series X with the choice between 4K resolution and up to 60 FPS, or 1080P resolution with up to 120 FPS. Get lost in the atmosphere of the hunt with immersive 3D audio on both Xbox Series X|S systems. It’s a great time to jump in for Game Pass subscribers, and you can even continue hunting via Game Pass Cloud. You can also join the hunt by purchasing the game digitally starting at $39.99, with preorders (including a sweet bonus!) available now.

In Monster Hunter Rise, you’ll encounter a slew of new monsters inspired by Japanese folklore, like the flagship Wyvern of Malice, Magnamalo. Of course, iconic and beloved monsters from past titles also return, rounding out a roster of fearsome beasts that are sure to test your skills.

Through the game’s story, you’ll travel to the serene Kamura Village, home to everything you’ll need as a hunter. Unite with a colorful cast of characters as you become the village’s foremost hunter, some of which you’ll team up with to face the encroaching Rampage – a catastrophic event where hordes of monsters descend upon the village. Uncover the mystery behind the Rampage as you strive to forge a future for the people of Kamura.

Seasoned hunters experienced with Monster Hunter World and Iceborne will feel right at home with the signature gameplay experience the series known for. Choose from 14 weapon types, each with their own unique playstyle and deep and rewarding mechanics to master. Defeat powerful monsters, and use materials carved from them to craft more and more powerful weapons and armor as you rise through the hunting ranks.

Monster Hunter Rise introduces several new unique elements to the hunter’s toolkit, with an emphasis on being more maneuverable and agile than ever. Wirebugs let Hunters shoot a special silk to unleash special attacks unique to each of the 14 weapons. Hunters can use them quickly zip up into the air and up walls, recover more quickly from impactful hits, maneuver into the right position to nail that perfect hit, and dodge a devastating hit just in the nick of time. Wyvern Riding is another unique Wirebug ability, where you can wreak havoc by controlling a monster, temporally turning one into an ally!

The familiar Palico Felyne friends are back to lend their support, but this time they’re joined by the new Palamute Canyne companions. They’re a hunter’s best friend with their own set of special abilities, and you’ll be able to ride on Palamute’s back to quickly get around during a hunt. And yes, you can pet them!

Choose to go it alone, or team up with up to three others online for cooperative hunts. You’ll be able to hunt together and continue your progress whether you’re hunting on Xbox One, Xbox Series X|S, or via the Xbox app for Windows PC.

At launch on Jan. 20, the game will come equipped with content and Event Quests from the previously released title updates (up to version 10), offering dozens of hours of intense hunting action and plenty of rewards to earn. This includes a number of fun collaborations quests from other series, where you’ll take on special themed quests to earn gear themed after Street Fighter, Okami, and Mega Man, just to name a few.

In Spring 2023, the hunt gets even bigger with the launch of the Monster Hunter Rise: Sunbreak massive expansion, taking hunters on a journey to the kingdom to become a Master Rank Hunter and battle new threats, like the bloodthirsty Malzeno.

Happy hunting, and see you in Kamura! 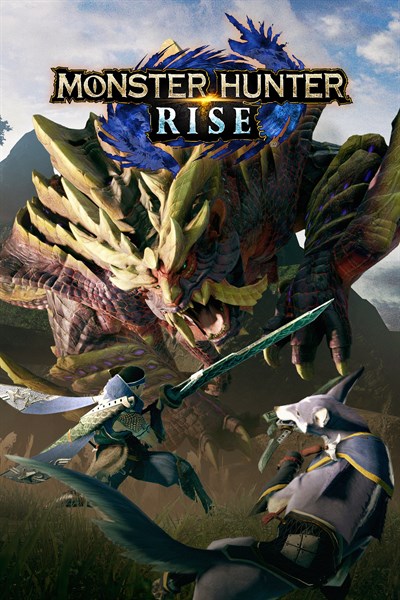 Rise to the challenge and join the hunt! In Monster Hunter Rise, the latest installment in the award-winning and top-selling Monster Hunter series, you’ll become a hunter, explore brand new maps and use a variety of weapons to take down fearsome monsters as part of an all-new storyline.

Ferocious monsters with unique ecologies
Hunt down a plethora of monsters with distinct behaviors and deadly ferocity. From classic returning monsters to all-new creatures inspired by Japanese folklore, including the flagship wyvern Magnamalo, you’ll need to think on your feet and master their unique tendencies if you hope to reap any of the rewards!

Choose your weapon and show your skills
Wield 14 different weapon types that offer unique gameplay styles, both up-close and from long range. Charge up and hit hard with the devastating Great Sword; dispatch monsters in style using the elegant Long Sword; become a deadly maelstrom of blades with the speedy Dual Blades; charge forth with the punishing Lance; or take aim from a distance with the Bow and Bowguns. These are just a few of the weapon types available in the game, meaning you’re sure to find the play style that suits you best.

Hunt, gather and craft your way to the top of the food chain
Each monster you hunt will provide materials that allow you to craft new weapons and armor and upgrade your existing gear. Go back out on the field and hunt even fiercer monsters and earn even better rewards! You can change your weapon at any of the Equipment Boxes any time, so the possibilities are limitless!

Hunt solo or team up to take monsters down
The Hunter Hub offers multiplayer quests where up to four players can team up to take on targets together. Difficulty scaling ensures that whether you go solo or hit the hunt as a full four-person squad, it’s always a fair fight.

Enjoy an exciting new storyline set in Kamura Village
This serene locale is inhabited by a colorful cast of villagers who have long lived in fear of the Rampage – a catastrophic event where countless monsters attack the village all at once. 50 years after the last Rampage, you must work together with the villagers to face this trial.

Experience new hunting actions with the Wirebug
Wirebugs are an integral part of your hunter’s toolkit. The special silk they shoot out can be used to zip up walls and across maps, and can even be used to pull off special attacks unique to each of the 14 weapon types in the game.

Buddies are here to help
The Palico Felyne friends you already know and love from previous Monster Hunter adventures are joined by the brand new Palamute Canyne companions!

*This content is also available as part of one or more bundles. Please check your previous purchases to avoid duplication. 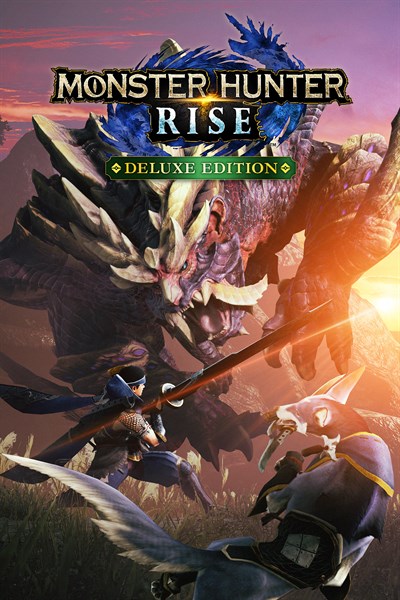 Includes Monster Hunter Rise and the Deluxe Kit content in one package!