The truth is holy water…! Or is it live cats…? Or moldy cheese?*

When writing and researching for Fibbage, the goal has always been to find facts that are just as weird, if not weirder, than the joke answers our players submit. That way, the truth blends in with any idea a wild party could come up with.

This editorial direction has created one of Jackbox Games’ most iconic trivia/comedy games. It’s so popular, in fact, fans are constantly asking for a new version with almost every Party Pack. Luckily, we love to listen to our fans.

So it was time to write Fibbage 4. Time to find more funny facts. The question becomes: How do we locate even more unbelievable true stories, bizarre historical events and truly trivial bits of knowledge, and how do we up the ante?

If you watch a couple of Fibbage live streams, you will find that one of the most common words uttered after the truth reveal is “Really?” So how about a question type where we could answer, “Yeah! Really! … and here’s the video evidence!”

If seeing is believing, then showing our players the truth in the reveal could pack the punch we’re looking for in Fibbage 4. Thus, two new question types were planned: Cookie’s VHS Vault and Fibbage Fan Facts.

And when I say planned, I mean we started with the barest bones of an idea: “How about a video question?” Then they needed to be tested to see if they would work and, more importantly, would be fun to play. Lately, our paper tests have gotten a lot more digital. This is due to the new tech available to us, and Jackbox team members who step up and build electronic tools to better demonstrate what a game looks like “on its feet.”

If the Fibbage team wanted to playtest video questions, we had to start watching some of the most bizarre movies available and editing clips for playtests. I, for one, spent weeks going through public domain horror movies, old educational films and nearly forgotten sci-fi “masterpieces.”

We were looking for the oddest bits of movie trivia we could collect. “The villain of this 1950’s eco-thriller turns out to be blank,” “This educational film teaches recycling tips by comparing our planet to blank,” etc.

What we really wanted was “the reveal.” Something where we could ask a Fibbage style question and the answer could play out in front of the audience. We wanted clips where people opened a door to show a sentient giant cactus or stepped out of a rocketship dressed like a tinfoil gladiator.

You usually learn something you didn’t expect from playtests and after a few practice games, we found that players also really enjoyed guessing the titles of movies. What words would best sum up the set of images they just saw?

Play Fibbage long enough, and you’ll see many of these facts are about people who do strange things or have odd occurrences happen to them. We wanted to see if we could reach out and have these people tell their stories themselves.

We were right. We got hundreds of entries, and were able to pick the ones that really made us laugh and provided some sort of visual evidence they could share with Fibbage players in the answer clips. Thus, they delivered the same jaw-dropping reveal as the fantastical films.

Both content types took a lot of research and careful curating to find our video Fibbage questions, but once we had them, we still had to get them into the game.

Our engineers and game designers broke new ground by putting video questions into our party games. Thanks to their hard work, you’ll get to see the movie clips on your big screen, answer the question on your phone and then move to the edge of your seat to watch the reveal play out in front of your entire party.

In the end, we’re all very proud to put something totally new into this Jackbox Party Pack while still delivering the shock-inducing Fibbage true facts. Only now, there may be a couple times where the “Really?” is replaced with gasps and laughter.

*The answer is holy water.

Play Fibbage 4 and other brand new party games in The Jackbox Party Pack 9. Now available for Xbox One and Xbox Series X|S. 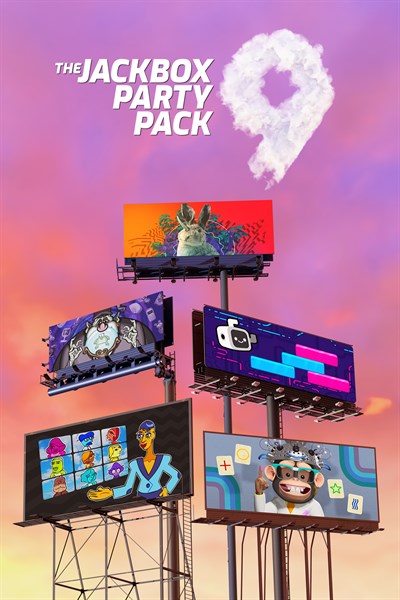 ☆☆☆☆☆
2
★★★★★
$29.99
Get it now
About The Jackbox Party Pack 9
Introducing the ninth installment of the best-selling Party Pack Franchise you know and love! Whether you’re hanging out with friends, having a remote happy hour, trying to make the holidays less awkward, or looking for your next game to stream, The Jackbox Party Pack 9 is here to spice things up.

Let’s keep it simple. You don’t need extra controllers for extra players – everyone uses their phones or tablets to play! Games support up to 10 players and 10,000 audience members joining in the fun to impact the outcome of the game.

The Jackbox Party Pack 9 is in English only at launch but a patch is coming soon with French, Italian, German, and Spanish localization. This game does not support online matchmaking but can still be enjoyed remotely using livestreaming services or video conferencing tools.

Fibbage 4 (2-8 players) – The hilarious bluffing party game returns with an all new Final Fibbage, video questions, fan-submitted questions, and Fibbage Enough About You mode! It’s a game so beloved that we decided to slap a 4 on it.

Quixort (1-10 players) – In this trivia sorting factory, work with your team to sort falling answers into their proper order before they hit the floor! Or, play the single player mode and see how many blocks you can sort before topping out. It’s as easy as A, C, B!

Junktopia (3-8 players) – A strange wizard has turned you into a frog! Create hilarious backstories for weird objects and then get them appraised. The player with the most valuable items becomes human again!

Nonsensory (3-8 players) – Professor Nanners is here to test your NSP (Nonsensory Perception) in this drawing, writing, and guessing game! How close can you get to guessing where another player’s prompt ranks on the silliest of scales?

Roomerang (4-9 players) – Channel your inner reality TV star in an attempt to come out on top! Respond to prompts, bring the competition and role-play to avoid being voted out. Never fear though, even when you’re out you’ll find yourself Roomerang-ed right back into the drama!

Related:
Next Week on Xbox: New Games for October 24 to 28
Unravel Park Story’s Spooky Tale Now on Xbox One and Xbox Series X|S
Accept the Challenge of a Souls-Like with a Humorous Twist in The Last Hero of Nostalgaia