Industria’s inspirations are clear from the jump: Half-Life 2, David Lynch movies, and more. It’s something the six-person team at Bleakmill has mentioned when discussing Industria online that had me excited. You play as Nora, a worker for the East Berlin-based company Atlas, just before the end of the Cold War. Your lover disappears, and you set off to find him, only to wind up in a parallel dimension where machines have taken over what used to be home. Sadly, the four hours following this mysterious and intriguing start fail to live up to the opening’s potential. Bleakmill aimed high, and while I thought it might land at times, I was left dissatisfied and wishing there was more meat on the bone by the time credits rolled.

However, one aspect that kept me satisfied from start to finish was everything you experience in Industria without touching a controller. Thanks to a world wholly overtaken by machines, its atmosphere is oppressive and haunting. The score matches, presenting strange choral melodies that play wonderfully into the game’s ambiance. Even its visuals, which sometimes show cracks like when viewing vistas on the horizon, sold the game well. I just wish Industria’s gameplay and storytelling matched. 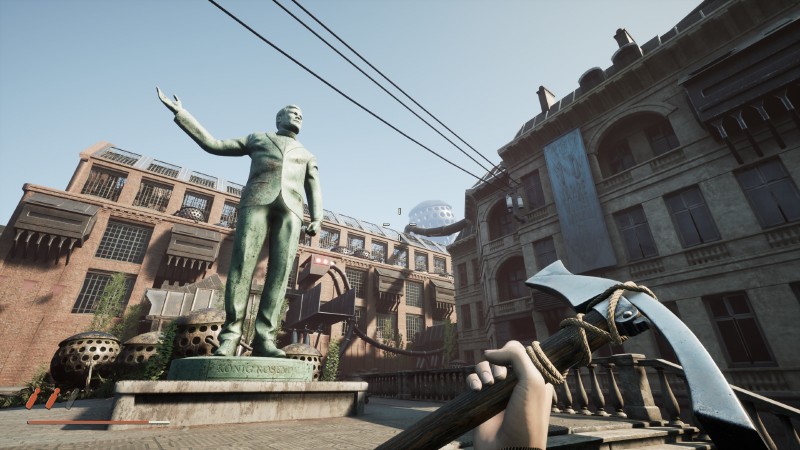 Immediately, controlling Nora feels wonky. You cannot move diagonally on the left stick, a minute but affecting lack of input, and the game feels decidedly less fluid as a result. That Industria is a first-person shooter further highlights this problem because, above all else, I wanted to feel fast and in control when fighting enemies. Of course, I didn’t.

The opening stages feature a distinct lack of guns, forcing me to rely on an ax to attack enemies and solve environmental puzzles. I was excited about how these puzzles might evolve, but oddly, save for a couple, the rest of the game reuses the same few. I encountered these puzzles while attempting to complete objectives that are almost exclusively something along the lines of, “Go here, interact with this, and progress forward.” It got boring quickly.

Bleakmill created a handful of different machines to fight while completing these objectives, and I liked the variations between them as they kept me on my toes. A small circular bot sprinted toward me before self-exploding. Another fought like a human with a gun, and another charged at me wildly, swinging its arms to attack. These firefights were often tense, and because Industria isn’t keen to toss out ammo in abundance, I was often on the run, scrounging through drawers and cabinets to find more bullets. I had a good time in these firefights, but I wish the actual scenarios were further polished to feel as varied as the robots I was shooting.

For the first hour, the central narrative mystery is intriguing enough for me to look past the relatively simple and dull “go here” objectives. There is even a mid-game twist I liked a lot. But as I reached the game’s final moments, I lacked the storytelling clarity I had hoped to achieve. One moment, I’m fighting a ton of robots in what might be the final combat scenario of the game. Then, I’m saying goodbye to a friend at breakneck speed before heading to an entirely new setting. Here, Bleakmill gave the narrative moment that everything was leading up to, and it missed the mark. Sure, it explained some character motives and solved Industria’s question from the opening scenes, but it wasn’t satisfying. It was too rushed to make sense, ending as fast as it began and not justifying my investment to that point.

While Industria’s atmosphere certainly nailed what it was going for, the monotonous gameplay and rushed story left me dissatisfied. Still, I loved the ambiance and backdrop, and I wouldn’t mind if Bleakmill took another crack at it – the rest of this world just needs a few more cogs added to its machine.