Skip to content
ASNF 2 years ago 3 min read
It’s cliche at this point to say that making games is hard. Of course it’s...

It’s cliche at this point to say that making games is hard. Of course it’s hard. It’s in many ways even harder to make a game entirely by yourself. But you know what’s really hard? Maintaining your focus and passion on one project for years at a time.

As I’ve said countless times before, Axiom Verge is both my hobby and my job. It puts food on the table and keeps a roof over our heads. But I’m lucky that it’s also what I would be doing even if I wasn’t making a living from it. For that to be true, and to stay true, I’ve got to push the boundaries of what I’m creating. It would be hard for me to maintain my passion for game development if I were just creating a new map layout and new weapons for Axiom Verge and calling it a sequel.

So I decided to push myself and try something ambitious. I’ve talked a little in the past about some of the technical challenges of making Axiom Verge 2, particularly the earth-like sloping terrain and the intelligent enemies, but I’ve never revealed the biggest challenge and most distinctive feature of Axiom Verge 2…until now.

Here’s the big reveal: Axiom Verge 2 is two worlds in one. Behind the overworld map that I’ve been showing this entire time, there is another interconnected breach world in an alternate dimension. I’ve hinted about this in an early trailer, where the drone goes through some mysterious portal, but I’ve kept this secret for a while.

So first things first, what is the breach? Well, if you’ve played Axiom Verge 1, you may recall a cutscene with this image: 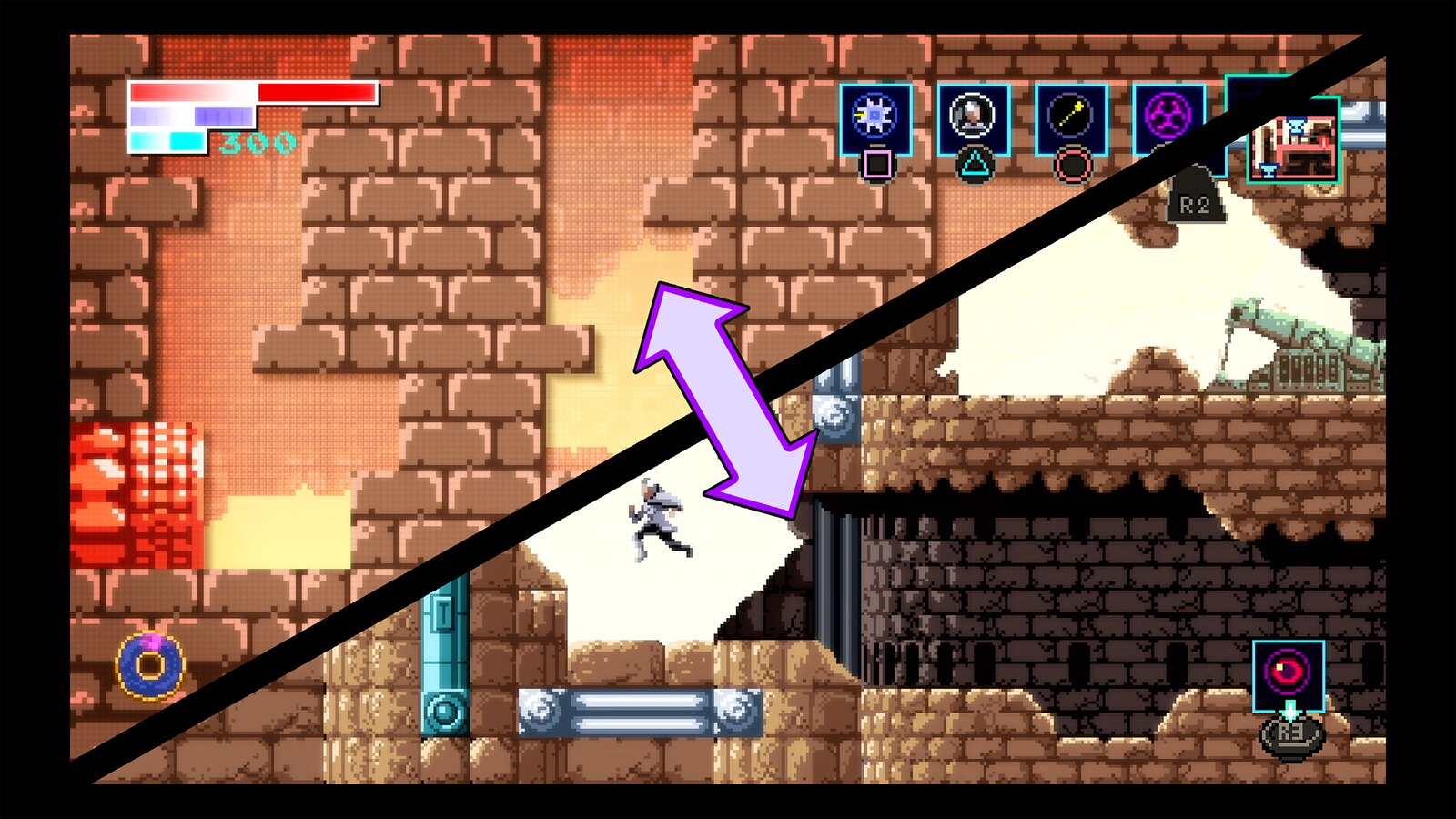 The breach, on the right, is a region of space, long thought to be unpassable, that at first kept the denizens of Sudra safe from the outside universe. [Minor spoiler alert imminent!] In Axiom Verge, someone named Athetos was able to traverse the breach and use a breach attractor to keep Sudra trapped. Hijinks ensue.

I first decided to include the breach in Axiom Verge 2 in some form around 2016. It took a while for the two worlds idea to gel. At first I considered just having one piece of land elevated above the other.  After toying around with a few approaches, I decided that approaching the breach as an additional dimension could unleash a huge range of opportunities for non-linear exploration.

In Axiom Verge 2, you’ll have the ability to enter and exit the breach and discover how that world is connected to the overworld. There will be secrets you can only find in the breach as well as places in the overworld that can only be reached via a path going through the breach—and vice versa.

At a glance, you can see that the breach area looks very different from the overworld:

The breach, being of alien origin, shares a bit more in common with Sudra than the earth. It has blockier tiles and a completely different look. The enemies are more organic than robotic, but all the while completely alien. In some ways, it is two games in one.

Making two games in one is challenging enough, but it’s really the interaction of the two worlds that makes it into a cohesive whole. If they were just two separate art styles, where some rooms were in the breach style and others were in the overworld style, that’s not particularly interesting. What is interesting, to me at least, is using one to explore the other.

For each location in the breach, there is a corresponding point in the overworld. The entrance and exit points for the breach and the overworld had to be carefully aligned to make sure players wouldn’t get trapped and so that you could reach everywhere you wanted to go. Working out the map system for this literally added an extra dimension to the game’s design.

Going into any more detail about how the breach and overworld interact would start bleeding into the territory of over-spoiling. I don’t want to ruin the fun of discovering Axiom Verge 2’s secrets, so I’ll stop here. Just know that the game will be out before you know it, and you’ll be dimension hopping in no time.