Skip to content
ASNF 1 year ago 3 min read
The Haunting will go live tomorrow in both Call of Duty: Warzone and Call of...

The Haunting will go live tomorrow in both Call of Duty: Warzone and Call of Duty: Black Ops: Cold War, and this year’s limited Halloween event brings with it new modes, maps, Ghostface from Scream, and Frank the Rabbit from Donnie Darko.

It is important to keep in mind what is going on within Activision Blizzard at this time regarding ongoing allegations about the work culture. The ongoing lawsuit from the California Department of Fair Employment and Housing (DFEH) against the company is over reported toxic workplace culture. The bulk of the suit focuses on “violations of the state’s civil rights and equal pay laws,” specifically regarding the treatment of women and other marginalized groups. To learn more about the proceedings thus far, including details listed in the lawsuit against Activision Blizzard, please check out our previous coverage here.

This year’s Haunting event will run from October 19 through November 2. During those weeks, players can experience the new Ghosts of Verdansk limited-time mode, which transforms the Verdansk Warzone map into a nighttime one. Dubbed a spiritual successor to Zombie Royale by Activision, “this limited-time mode has you fighting threats both human and unhuman.”

In the mode, you must manage your character’s Fear level (influenced by being shot at, camping, seeing dead bodies or ghosts, or watching teammates go down) by playing well and staying within the Sacred Ground circle. If you fail to do that, you’ll “succumb to the darkness” and become a Ghost of Verdansk. Ghosts, which you become upon death rather than an Operator sent to the Gulag, don’t have access to weapons and instead rely on the Super Jump, Teleport, and Spectral Blast abilities to bring fellow players over to the other side. 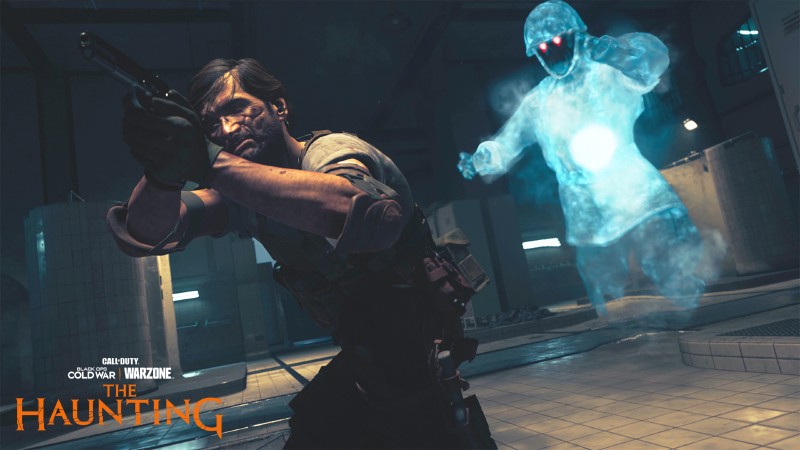 You can do that while sporting one of the Haunting’s many event-specific Operator skins, including Ghostface from Scream, Frank the Rabbit from Donnie Darko, the Necro Queen Operator skin for Portnova, the Disciple of Mayhem skin, or even the Lumens skin for the Maxis Operator. These skins will be available in the shop for purchase for a limited time while the Haunting event runs in-game.

On the Black Ops Cold War side of things, the iconic Nuketown map will be remade to feature Halloween decorations such as spooky lights and more. The Infected game mode returns to Black Ops Cold War’s multiplayer alongside a Halloween-themed Prop Hunt mode and the unique Scream Deathmatch mode.

Over in Black Ops Cold War’s Zombies mode, players will be tasked with surviving the Hallows’ Eve Outbreak. For more details about these new skins, maps, and modes, head to Activision’s Haunting blog post.

The Haunting event will lead right into the launch of Call of Duty: Vanguard, which hits console and PC on November 5. When that launches, so too will the new Pacific-themed Warzone map, which will mark the end of Verdansk’s run in the battle royale.

Will you be jumping into The Haunting this year? Which Operator skins are you picking up? Let us know in the comments below!