Skip to content
ASNF 2 years ago 4 min read
With over ten games in the series, the Kingdom Hearts franchise has been going strong...

These various installments have expanded the world of Kingdom Hearts and introduced countless new characters, settings, and gameplay mechanics. If there’s one constant that’s been present in each game, aside from the magical pairing of Disney and original Kingdom Hearts characters, it would have to be the fantastic music.

While various composers and arrangers have contributed to the library of Kingdom Hearts music since the series’ inception, its main composer is the legendary Yoko Shimomura. Combining her sweeping orchestral scores with beloved Disney songs, such as “Under the Sea” or more recently “Let It Go,” and the pop stylings of Japanese superstar Hikaru Utada makes for a musical match made in heaven that can only be heard in the Kingdom Hearts series.

Kingdom Hearts Melody of Memory, the latest installment in the series which just released today, celebrates the franchise’s incredible music in an interactive way. You’ll start off playing as the classic trio of Sora, Donald, and Goofy and traverse through fantastical Disney and Kingdom Hearts worlds while partaking in rhythm-fueled battles to defeat the Heartless and tough bosses. There are over 140 songs from the series for you to master, including classic Yoko Shimomura fare like “Dearly Beloved,” Disney standards like “Bibbidi-Bobbidi-Boo,” and the all-time favorite “Simple and Clean” from Hikaru Utada.

According to Kingdom Hearts franchise Director Tetsuya Nomura, “The concept for this title is to reflect on the series thus far through memories, since I believe music and memories are closely tied to one another. Looking back on various moments in the games, I’m sure you’ll find that they are also tied to the music.” To that end, as you play through the game, you’ll visit over 40 worlds from the Kingdom Hearts series, and in doing so, experience highlights from the entire series story. Nomura adds, “Even if you are unfamiliar with the series, this title will allow you to get an understanding of the general background of what has happened up to this point.”

Each world contains various songs associated with it, and the stages can be one of three possible types: Field Battle, Memory Dive, or Boss Battle. Field Battles will have your team running forward on a musical score, swatting and dodging enemies as they appear to the rhythm of the song, whereas Memory Dive stages will have your team soaring across the screen as a gorgeous cinematic plays, hitting button prompts as you go. Lastly, Boss Battles will, as the name implies, have your team face off against some of the series’ baddies. You’ll need to hit the proper buttons in time with the rhythm to attack, dodge, and guard.

Kingdom Hearts Melody of Memory also offers some great co-op and competitive multiplayer for those looking to play with friends! You can team up in local co-op and take on stages as Sora and Riku, working together to rack up a high score together. Or, if competitive play is more your thing, you can face off with opponents online and see who can earn the highest score in a Field Battle stage. You can toss various obstacles and hazards in your opponent’s way (and vice versa!), leading to some crazy and chaotic fun.

If you’re a seasoned pro at rhythm-action games, you can bump the difficulty up to Proud and turn on Performer Style which adds extra button prompts to the stages. Or, for a more relaxed experience, you can play on Beginner or Standard difficulty level and try out One Button Style, which, as the name suggests, simplifies things by only requiring you to press one button on your controller. You can freely mix and match the difficulty modes and the button input styles, so find which combination is the most fun for you!

In addition to the Disney worlds you’ll visit in Kingdom Hearts Melody of Memory, you can also look forward to meeting various Disney characters, including Simba, Stitch, Beast, and of course, King Mickey himself. These characters will appear in select stages and temporarily join your party, so be sure to keep an eye out and discover everyone in the game.

Experience all the musical goodness Kingdom Hearts Melody of Memory has to offer today. You can also download the free demo to try your hand at some rhythmic battles in both single player and co-op! 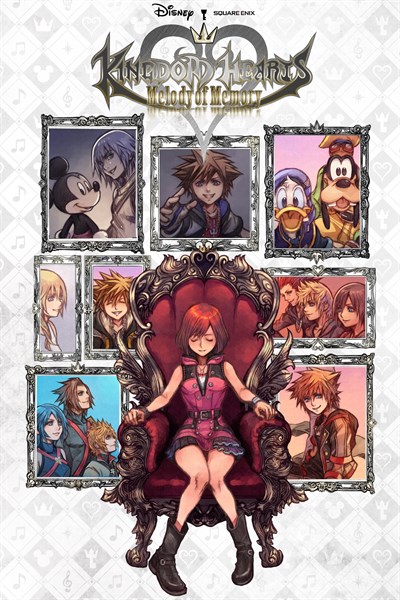 ☆☆☆☆☆
★★★★★
$59.99
Get it now
Experience the music of KINGDOM HEARTS like never before! Melody of Memory features 20+ characters, 140+ music tracks, and online VS multiplayer mode. Explore the music and memories from the KINGDOM HEARTS series!

Play as famililar faces from the KINGDOM HEARTS series, including Disney guest characters who will appear to lend you a hand.

Enjoy a massive variety of music from both the KINGDOM HEARTS series and Disney, with a collection of over 140 songs. Dive into rhythm-action gameplay with memorable tunes in this can't-miss musical journey!

Related:
Fuser is the Nonstop Festival Where You and Your Friends Control the Music
Celebrate Coldplay’s 20th Anniversary with a Rock Band Challenge
Yuji Naka Invites You to the Stage in Balan Wonderworld