EA Sports has been producing officially licensed PGA Tour video games since 1990, with stars like Tiger Woods and Rory McIlroy lending their names to the product over the years. However, the company has not released a PGA Tour video game since 2015, meaning other franchises have had time to slide into the space once occupied by EA Sports’ mainstay series.

However, EA Sports is ready to make up for lost time with its newest title. The emphasis this time around is on realism, not only with how the players and courses look but also in how players must approach every hole. For starters, each of the 30 launch courses was created with the help of the course superintendents, state-of-the-art technology (including helicopters equipped with lasers), and even geologists to ensure the most true-to-life experience for players when they step into the course-accurate tee boxes. Licensed players and realistic crowds also received a keen emphasis, with players from both the PGA and LPGA Tours mapped using high-tech cameras in multiple poses to render them in the Frostbite Engine. In addition, actors were scanned for the crowd to make them feel like actual people on the course instead of cardboard cutouts. 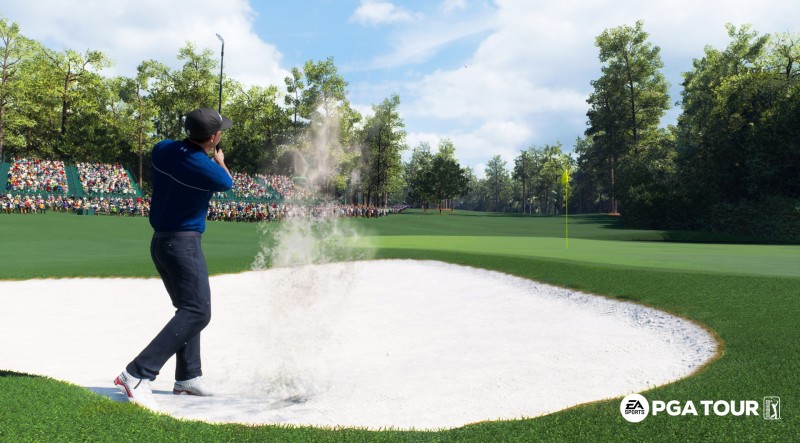 The four Majors were among the highest priority for the developers, as the PGA Championship, The Open Championship, the U.S. Open, and the Masters all feature custom presentations, highly detailed in-game trophy models, and special commentary. Speaking of commentary, players can expect hundreds of hours of content from a broad analysis team to avoid repetitive chitchat when you’re working through the various courses. You can also tweak various presentation and gameplay settings, including how dense you want the crowd to be during your round.

When you finally do step up for your first drive, the gameplay leverages ShotLink and Trackman data used for real-world analytics of PGA Tour players for realistic outcomes on every shot. This data allows each bounce and roll to behave accurately across every terrain and slope, even taking into account which type of grass grows at each course. In fact, every course in the game has its own physics profile, so playing through a dreary day at The Old Course at St. Andrews Links feels different than a humid round at TPC Sawgrass.

After selecting your club and approaching your ball, you have 20 different shot types to choose from, letting you attack each course how you want to and how the pros do in real life; you can even adjust the shape of your shot’s arc to perfect your approach. Using the analog stick to control the swing, players must execute the backswing in a smooth and efficient manner and time their impact on the ball to maximize results. If you time it just right, you receive a Big Hit Moment, a series trademark where you get a slow-motion view with a dramatic camera angle to emphasize your mastery on that stroke. Once you’re on the green, putting is also controlled by the analog stick, with a line that shows how far back to stroke and a shot assist option to help you aim. EA Tiburon hopes to add the traditional three-click control scheme to the game post-launch.

While you can play locally or online in unranked play, tournaments, private matches, and other game modes (including one where 16 players are simultaneously on the course), the destination mode is Career. Unified RPG progression lets you make the decisions you want to make for your created player, giving you meaningful choices to build your golfer from the ground up with skills, abilities, and gear to complement the robust customization options. In Career, you can even choose where you want to start, whether that’s as an amateur, on the developmental Korn Ferry Tour, or all the way in the PGA Tour; winning championships in the amateur circuit opens invites to more prestigious tournaments, giving you a meaningful feeling of progression.

Though it’s been a while since EA Sports released a licensed golf game, PGA Tour looks to pull out all the stops in pursuit of delivering the most realistic experience we’ve ever seen. Though I’ve long since fallen off the sim-golf genre, I’m already eyeing my tee time on March 24 when the game arrives on PlayStation 5, Xbox Series X/S, and PC.