Skip to content
ASNF 3 years ago 5 min read
We have an exciting announcement to make: Dragon Quest XI S: Echoes of an Elusive...

We have an exciting announcement to make: Dragon Quest XI S: Echoes of an Elusive Age – Definitive Edition is coming to PS4 on December 4!

This updated version of the original Dragon Quest XI: Echoes of an Elusive Age, which released on PS4 in 2017, is no simple re-release. It’s dramatically enhanced, with entirely new story content, new ways to play, and more additional features than you can shake the sword of Erdrick at.

To give you an idea of what to expect from the game, we thought we should dig into some of those enhancements and show you just how definitive this edition really is.

If you’ve played Dragon Quest XI before, you know that the friends and allies you gather over the adventure are brimming with charm and personality. In the Definitive Edition of the game, you get to spend even more time with these awesome characters.

These new bonus stories that put the focus squarely on their exploits. These aren’t new cutscenes or short sequences either — they’re meaty additional chapters that provide hours of new gameplay. Players will be able to enjoy learning more about many of their companions, including:

These stories are worked into the main story of the game – they’re not hidden, so everyone will enjoy them in the normal course of play. Which is good, because they’ll make you laugh, cry and gain a better understanding of uniquely loveable cast.

Early on in the adventure, you’ll encounter a creature called a Tockle. It will introduce you to the wonderful world of Tickington – a charming town created with retro 2D visuals.

This place is special — not just because of its weird residents, but because it lets you travel back to previous Dragon Quest adventures – all recreated in the same charming 16-bit art style.

You’ll visit key locations and events from the series to solve side-quests, battle monsters and more. For fans of the series, it’ll be nostalgia overdrive – a way to relive happy memories of adventures past.

For those of you who are new to Dragon Quest, it acts as a fantastic introduction to the series as a whole — and will give you an understanding of how important and influential it’s been to gaming.

Or you could just ignore it — it’s entirely optional after all. But I’m willing to bet that once you start digging into the history of the series, you won’t want to stop.

The whole game is playable in 2D

One look at the screenshots will tell you that Dragon Quest XI S is a beautiful game, with a vibrant, colorful 3D world.

If you want your adventure to have a little retro flair, you can switch to a 2D mode and play the entire game this way. This not only changes the look and layout of the world, it also slightly alters the mechanics so that it plays like a classic Dragon Quest game. 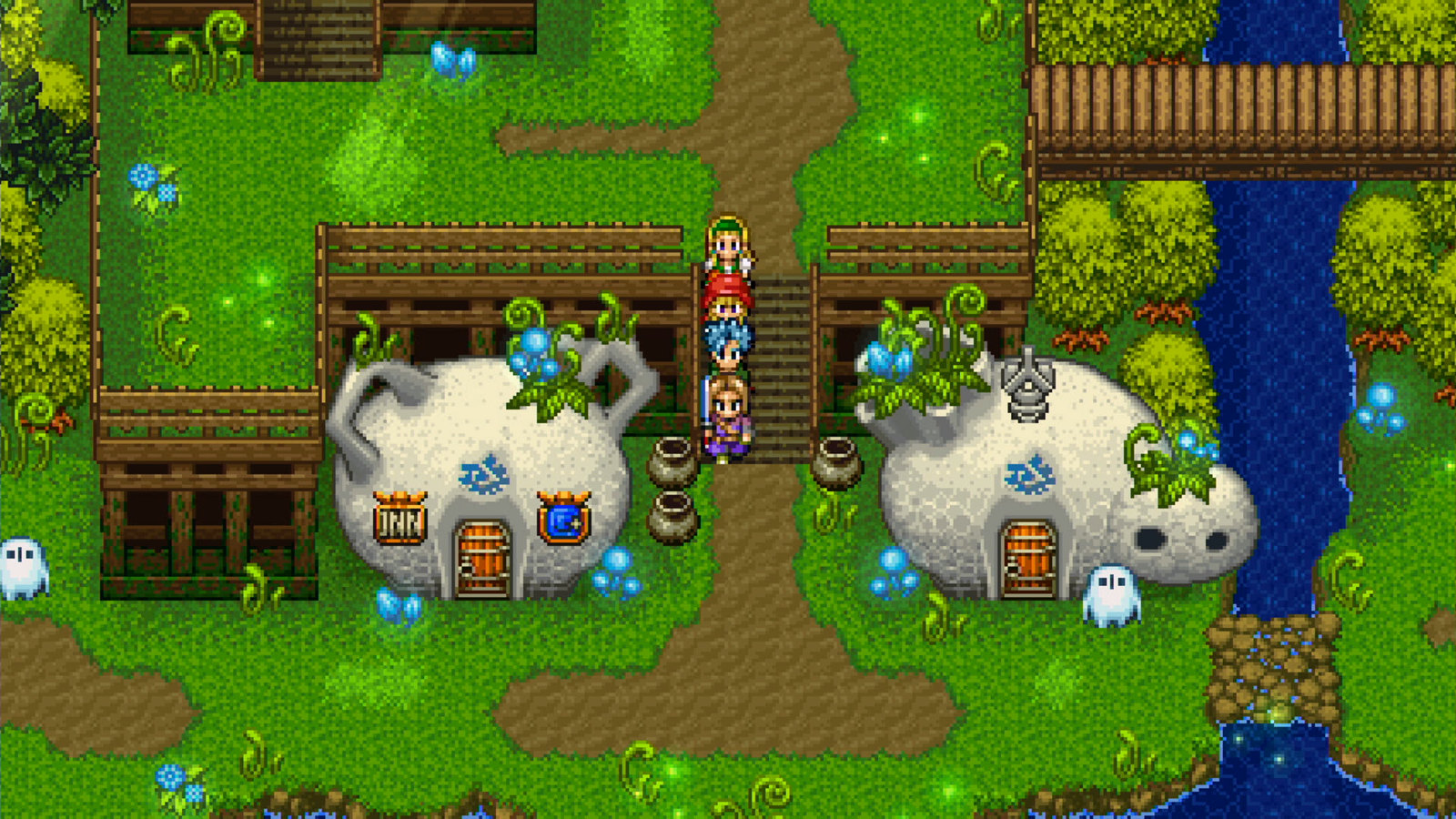 For example, in the 3D mode, battles play out command by command — you give a character and order, and they immediately execute it. In the 2D mode, it plays like the older games – you give your whole party their orders upfront, and then the battle plays out.

It’s up to you which style you prefer – and you might be conflicted because they’re both fun in slightly different ways. Fortunately, you don’t have to commit to just one. You can switch modes at any save point, and restart that chapter in the different mode.

Speaking of beautiful visuals, wouldn’t it be great if there was a way to capture them so you can share them later? Some kind of… ‘photo mode’, if you will.

Yes, there’s now photo mode in Dragon Quest XI. It gives you lots of options on how to compose shots too. You can move characters around, pose them in different ways, fiddle with the angles and more.

That said, fans of the synthesized soundtrack don’t have to worry —  that’s included too, and you can switch between the music options instantly through the game’s menu.

One thing the team wanted to focus on when working on the Dragon Quest XI S: Definitive Edition was to give the players more choice on how they play. For example, one new addition to the game that will please fans is a new ultra-fast battle mode. This lets you select from three different speeds to progress through fights in a short space of time.

It’s perfect for occasions where you want to explore an area for rare treasure, or are hunting for a specific loot drop from foes. Just be aware that it won’t suit every fight – you’ll want to switch back to normal speed for boss battles, for example.

Fortunately, you can adjust speeds at any point while playing, even mid-battle.

While Dragon Quest XI: Echoes of an Elusive Age is known for an amazing English voice cast, we understand many JRPG fans like to play games with the original Japanese voices.

The new Definitive Edition features a Japanese voice track, so you can play through the whole game this way if you prefer.

A treasure trove of quality of life enhancements

In addition to all the new content, there are dozens of quality of life enhancements such as:

All of these combine to make the game smoother and more convenient to play.

As you can see, Dragon Quest XI S: Echoes of an Elusive Age – Definitive Edition is as packed with enhancements as its name is long.

That new story content’s particularly exciting — Sylvando and Erik’s tales struck a particular chord with me, though you’ll likely find your own favorites when the game launches on December 4!