This past weekend (December 3-5) marked the fourth FIA Certified Gran Turismo Championships World Finals and our last on GT Sport before we switch to GT7 next year. This impending change was highlighted as Porsche unveiled their exciting new, all-electric Vision Gran Turismo car for GT7 as part of the Nations Cup broadcast on Sunday. It was also great to see Lewis Hamilton make an appearance to congratulate our 2021 Nations Cup champion.

All in all, the World Finals were a great success again – raced and recorded remotely for the second year in succession. The freedom we have in the series makes it fascinating that we can create very different races in different cars for the finals, and those scenes really make an impression. You can also identify the different characters of our competitors.

It really struck me at the weekend how high the level of the competitors has become. All of them are so fast, and so it all comes down to very small margins, having the strength to drive 100% for the whole race and, dare I say, a little bit of good luck at times.

The weekend started on Friday with the Toyota Gazoo Racing GT Cup. While not part of the official Championships, close action is always guaranteed in the Toyota GR Yaris and new GR86 cars. The final race around the famous Circuit de la Sarthe saw experienced Japanese driver Tomoaki Yamanaka (yamado_racing38) take victory by a mere four-tenths of a second from last year’s champion, Takuma Miyazono (Kerokkuma_ej20). It was also very pleasing to see another Japanese driver, Rikuto Kobayashi (TX3_tokari71), take third. Not because he is Japanese, but because he is only 16 years old and a really exciting prospect for the years to come.

Saturday’s Manufacturer Series World Finals was set to be another really exciting climax to the Series with Team Toyota and Team Mazda tied on points after the World Series events this year.

In the end, Mazda could do nothing in the face of three impeccable performances from Team Toyota’s Igor Fraga of Brazil (IOF_RACING17), Coque López of Spain (coqueIopez14) and Japan’s Tomoaki Yamanaka. For Fraga and Yamanaka it was their second Manufacturer Series victory for Toyota, having lifted the Boccioni-inspired trophy in 2019.

López started them off with victory in Race 1 on the Autodrome Lago Maggiore – GP II before Yamanaka – starting from the pole secured thanks to the Race 1 victory – drove beautifully and benefited from taking a different tyre strategy to the rest of the field to win on the Tokyo Expressway – East Outer Loop. Igor Fraga has shown himself to be a huge fan of the Nürburgring 24h circuit, and he held his concentration, and the lead, throughout the five laps of the 25.4km track. You can hear on the team radio that these three compete very much as a team and work hard for each other behind the wheel or working on strategy. 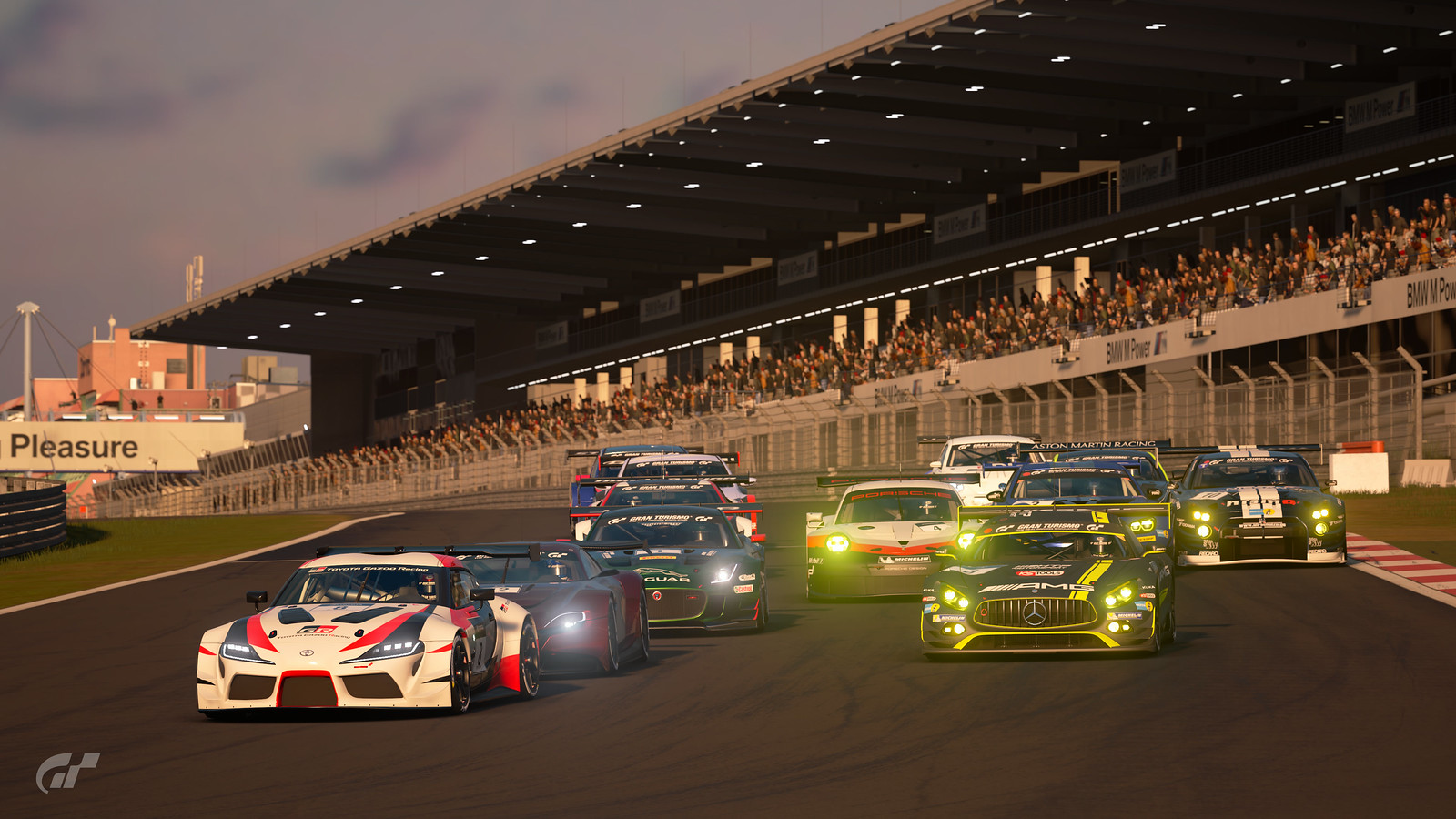 Team Mazda finished the year second in the points standings having found it hard to come back from a disappointing seventh place in the opening race, despite taking third in Race 2 and second in Race 3. Rounding out the top three was Team Porsche with a single point advantage over fourth-placed Mercedes-Benz. 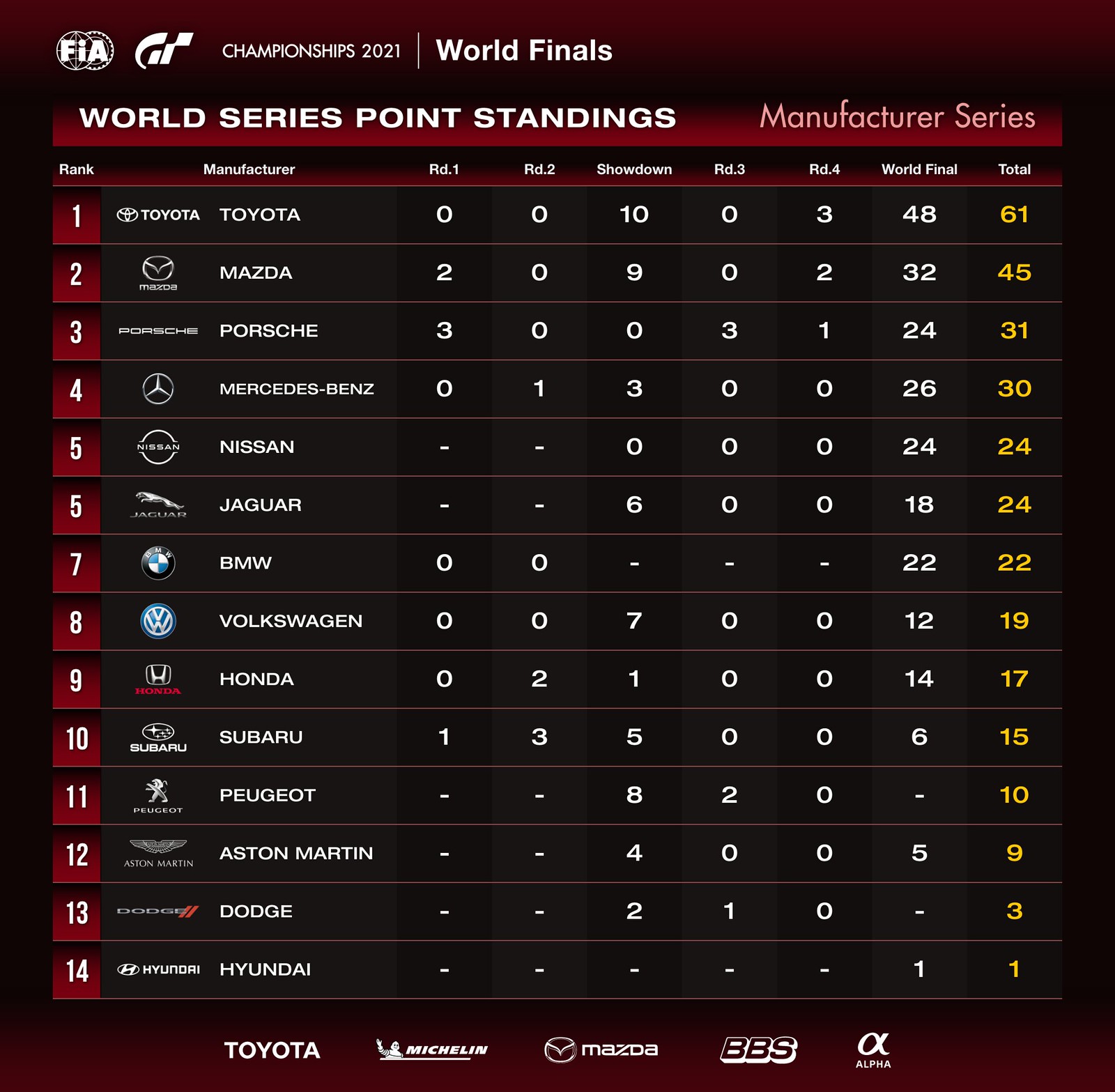 The World Finals of the Nations Cup on Sunday saw 32 competitors representing 18 different countries and territories. Three regional semi-finals would create the 16-driver field for the Grand Final. 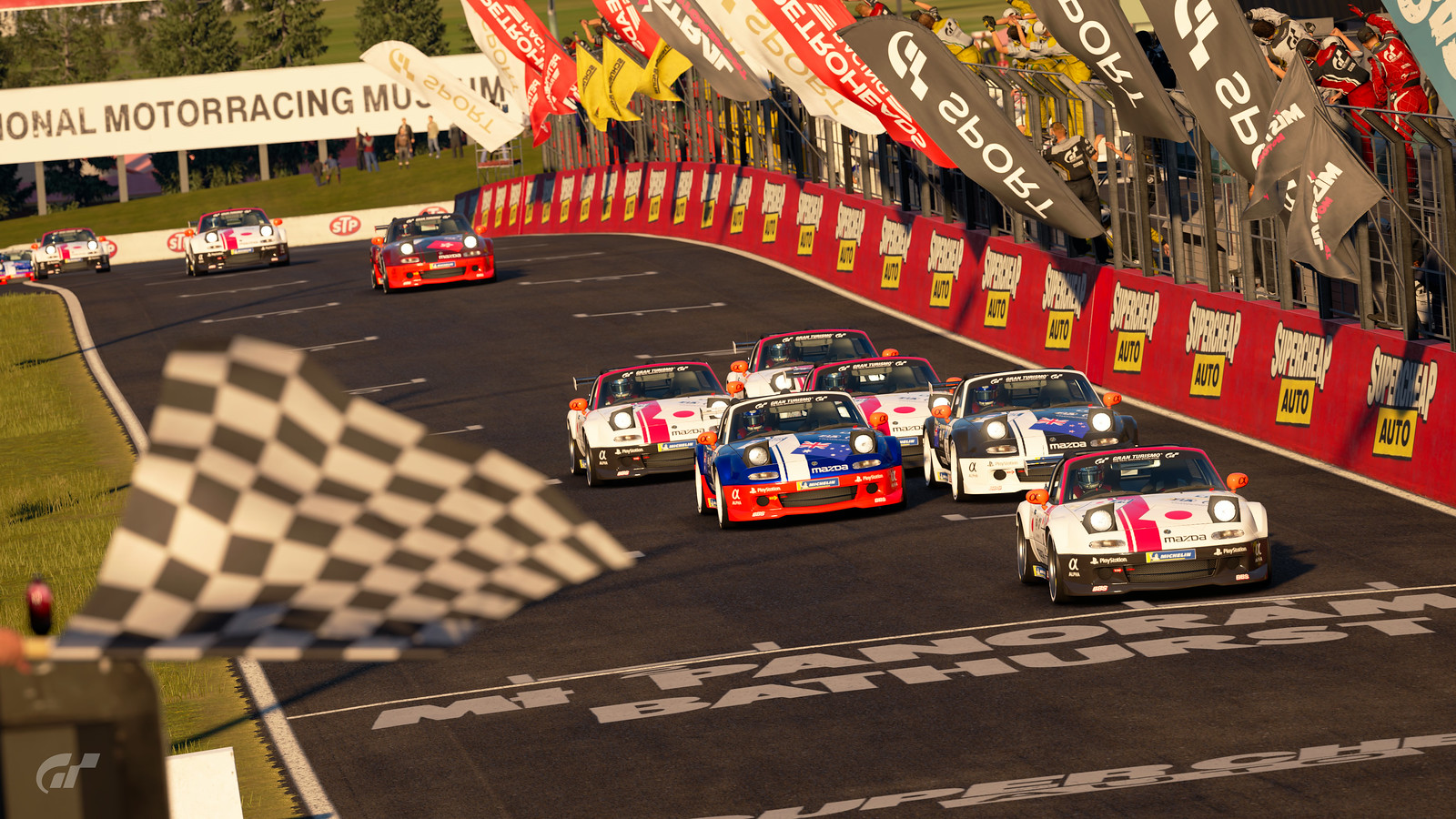 The Asia-Oceania semi-final played out on an intriguing combination of the Mazda Roadster Touring Car on Australia’s Mount Panorama circuit and produced some extraordinarily tight racing. A thrilling finish saw 2020’s Nations Cup champion Takuma Miyazono (Kerokkuma_ej20) take the race win by three-tenths of a second.

Next up it was the turn of the Europe, Middle East, and Africa region that contained three of the top four in the points table, including Italy’s Valerio Gallo who has been in incredible form all year. Only the top six finishers would proceed to the Grand Final and anything was possible in a 15-lap race around Autodromo Nazionale Monza No Chicane in Gran Turismo’s take on a 1980s formula car, the F1500T-A. 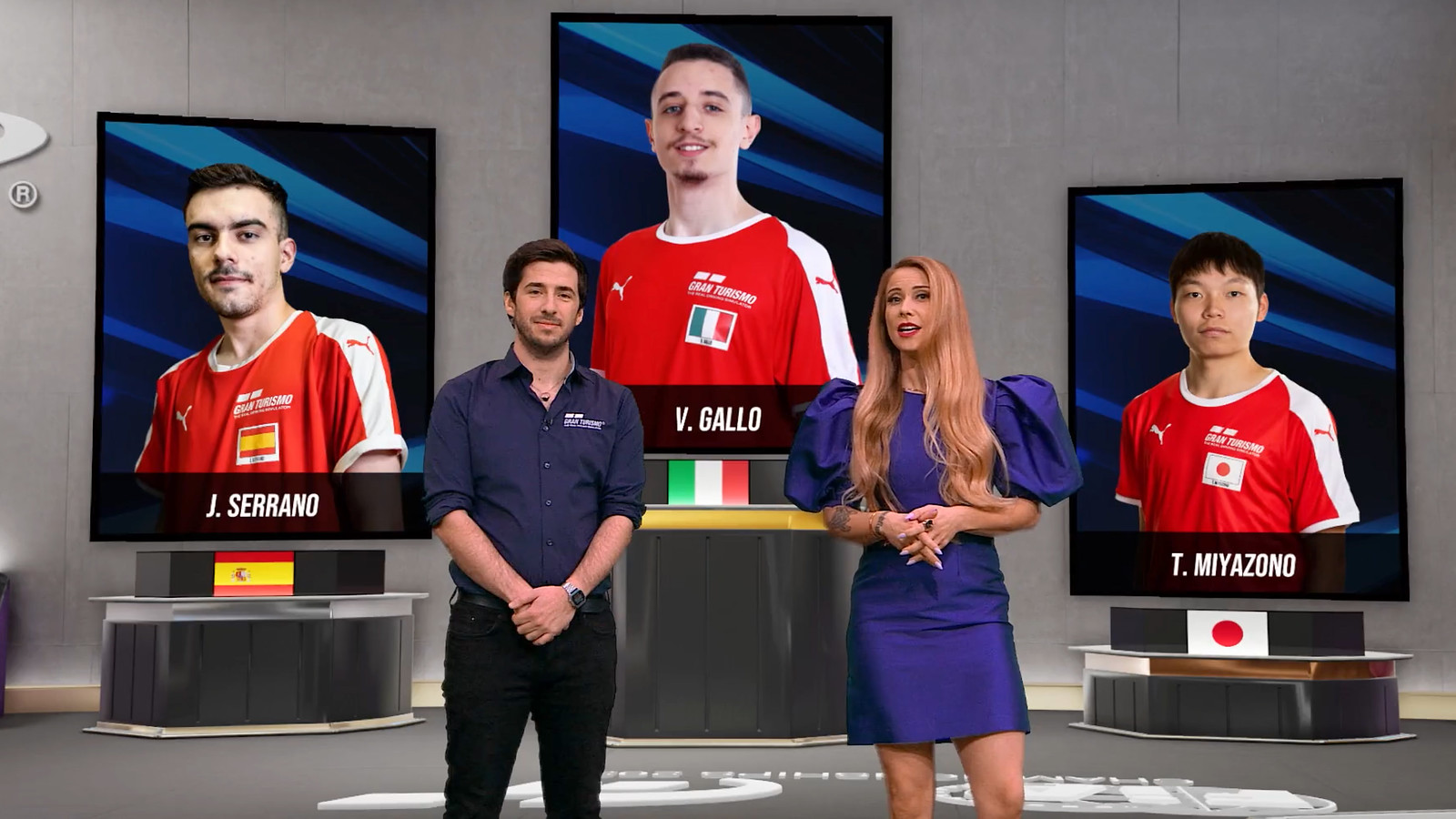 A daring tyre-strategy from Spain’s Coque López almost paid off, but it was Gallo and his closest rival in the points table, Spaniard Jose Serrano (PR1_JOSETE), who enjoyed a stunning last-lap battle. Gallo took the chequered flag by four-hundredths of a second to add to his lead in the points table. 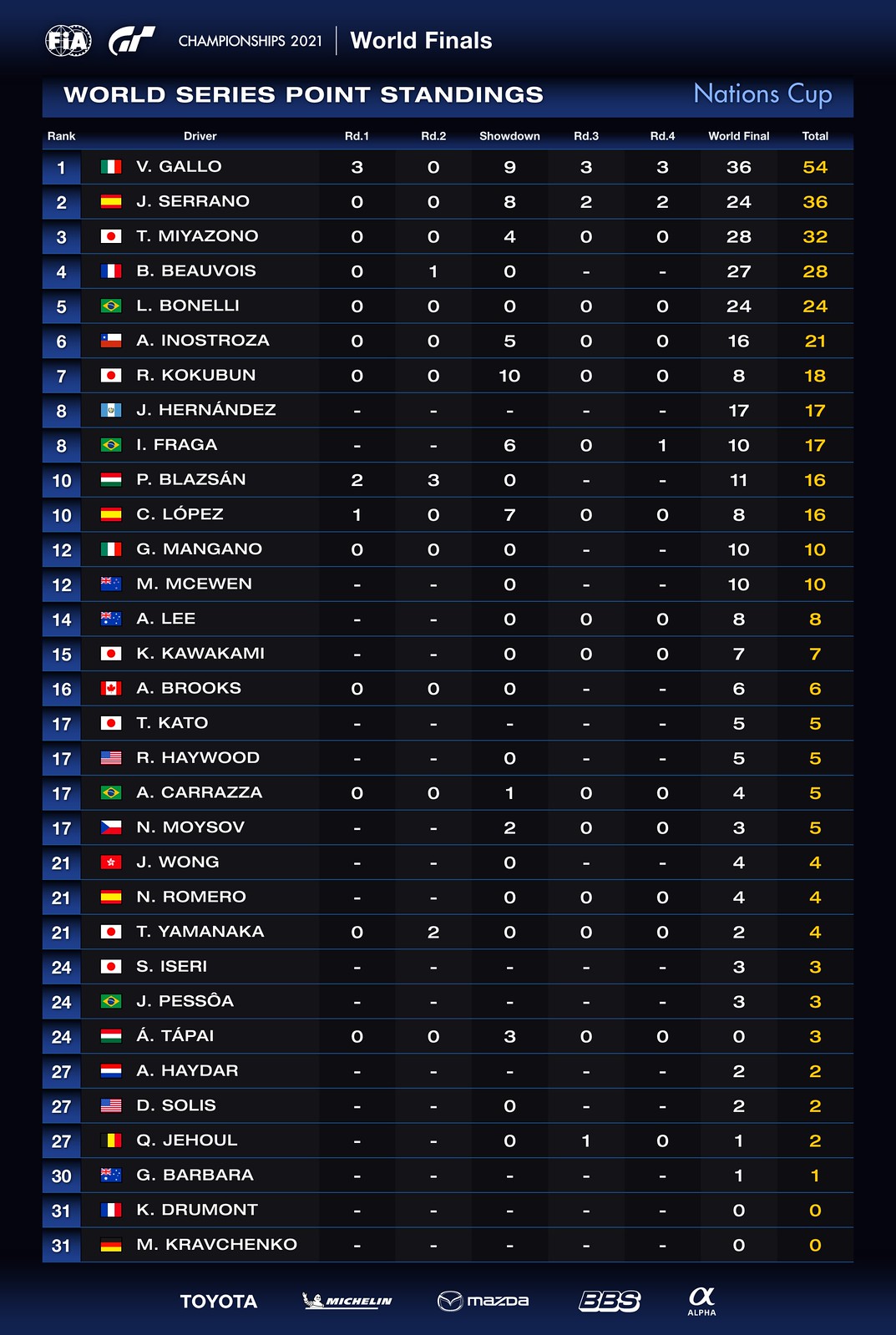 The North, Central and South American semi-final was an incident-packed affair around the Blue Moon Bay Speedway – Infield A in identical Ford GTs. With only five places up for grabs in the Grand Final, another close finish saw Lucas Bonelli (BRA) (TGT_BONELLI) cross the finish line first, followed by Igor Fraga (BRA), Angel Inostroza (CHI) (YASHEAT_Loyrot), Juan Hernandez (GUA) (TX3_Kangreti) and Andrew Brooks (CAN) (PX7-Deafsun), who took the final spot in the Grand Final.

The Gran Turismo original Dragon Trail – Seaside circuit was the scene for the Grand Final with another Ford GT car, this time the LM Spec II Test Car, providing the hardware. The top 16 Gran Turismo drivers in the world lined up on the grid. Serrano had done all he could to stay in contention by taking pole position by just three-hundredths of a second from arch-rival Gallo.

Gallo enjoyed a strong start, but with different pit stop strategies at play it was a hard one to call. 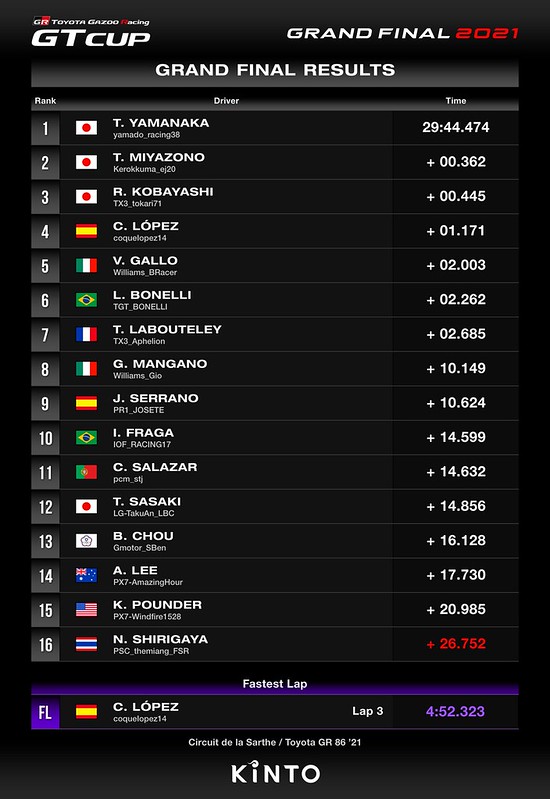 On lap 18 of 22 a mistake by Miyazono allowed Gallo to retake the lead. Incredibly, however, on the penultimate lap, Frenchman Baptiste Beauvois (R8G_TSUTSU), who had started last on the grid after a costly mistake in qualifying, passed Gallo and took the lead on the softer compound of tyre while Gallo had to run to the end on the mediums. A small error allowed Gallo back past on the final lap and he was able to cling on through the last few corners for victory in the race and the Championship. 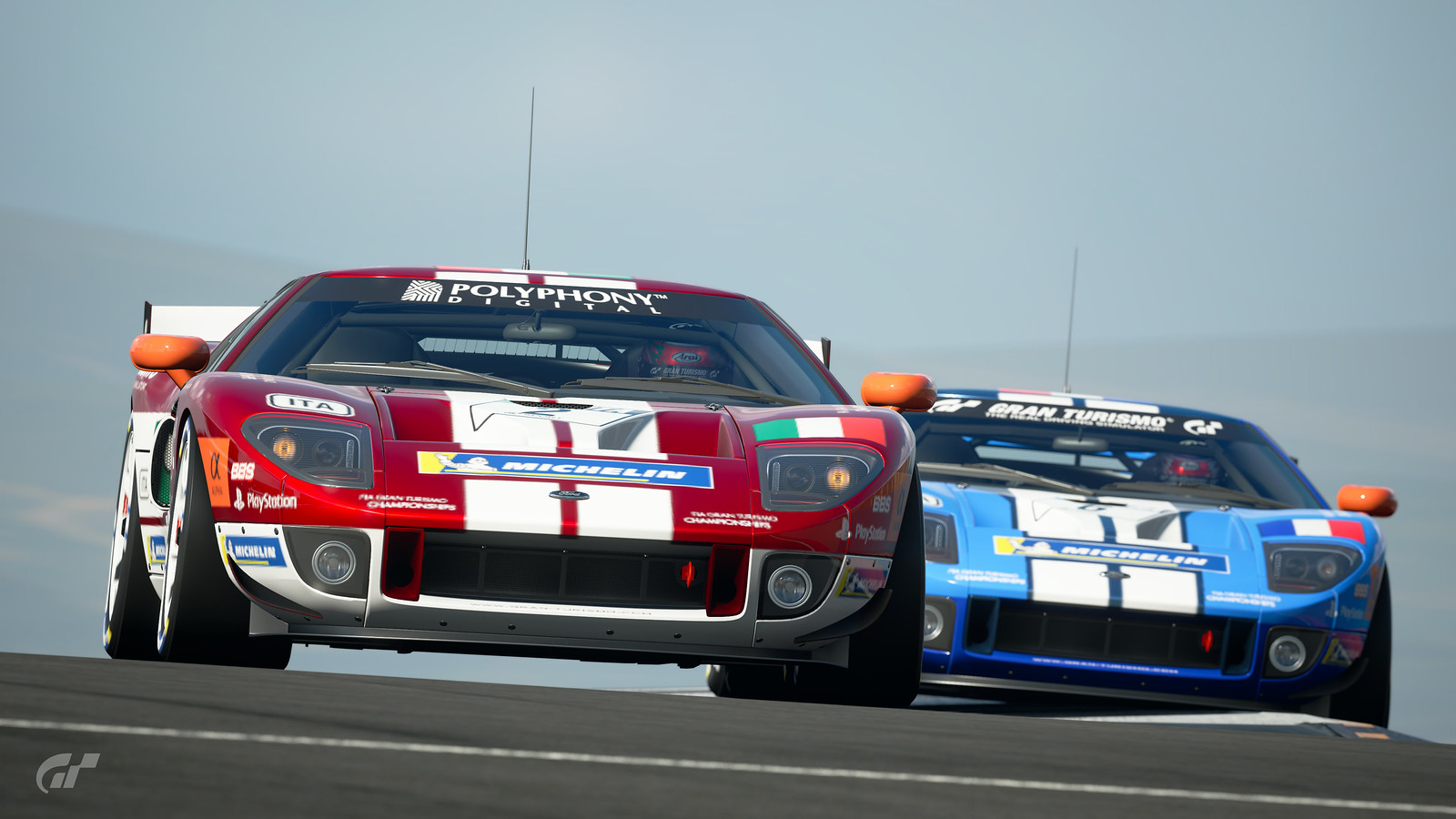 Fourth on track for Serrano secured him second overall in the series. Miyazono’s drive to third in the Grand Final put him third in the points, just ahead of Beauvois, whose inspired drive promoted him to fourth overall.

Once again, it was a really exciting World Finals weekend and congratulations to all our Champions who will be honoured during the FIA Prize Giving Ceremony in Paris later this month. I would also like to say a huge thank you to all of the drivers who have taken part this year in the Online Series and the World Series events.