Skip to content
ASNF 2 years ago 2 min read
Hearthstone is getting a significant update in just a few days with the Darkmoon Races...

Hearthstone is getting a significant update in just a few days with the Darkmoon Races Mini-Set on January 21. Over the past few years, Hearthstone has become not just the core game, but many different experiences under one roof.

Don’t like Standard and dealing with the metadecks? Hearthstone’s take on auto chess, Battlegrounds, might be a nice escape. Still want the familiarity of cards but with an “every run is different” feel to it? Duels lets you play a roguelike run against other players, a natural progression from the dungeon delves that they were experimenting with a while ago. Arena lets players engage in a small scale format where single-card analysis and synergies can come to life outside of a constructed deck zone. And of course, there are still cozy Tavern Brawls that present strange game modes each week.

The Darkmoon Races Mini-Set lets players pick up all the cards in the set at one price for $14.99 or 2000 gold. Alternatively, they can also be found in Darkmoon Faire packs once it launches. There are 35 cards in the new infusion, including cool characters that can really tie together strategies. Tapping into the powers of corruption? Dark Inquisitor Xanesh has a plan for you! 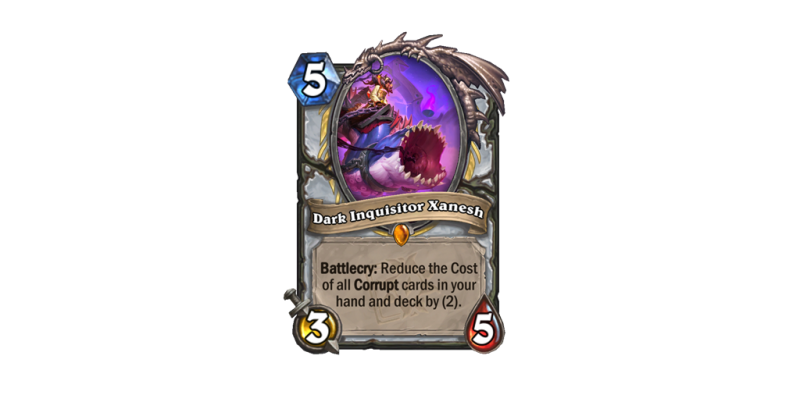 Battlegrounds is getting a few new heroes in this update as well. Tickatus is a premium source of Darkmoon prizes, gaining one for free every four turns. That sounds like it could get out of control! If you’ve been tinkering around with a taunt build trying to utilize many of the newer Battlegrounds cards that have “whenever your minion with taunt [does things],” Greybough looks like he’s the perfect treant hero to take some chances on there. Some new Demon cards are also getting stuffed into the mix, so maybe Demons will be a viable faction (yeah right).

Duels is getting a bunch of new options with this patch. 10 new hero powers(!), 25 new treasures, and a ratings reset (both heroic and casual) are on deck. Duels is a fantastic way to inject a little variance and a lot of fun into classic archetypes, if you haven’t had a chance to try it yet. It takes the dungeon run theme that began with Kobolds and Catacombs and ramps it up into a competitive PVP experience!

Are you playing Hearthstone? And if you are, what mode is your jam? Let us know in the comments below!