Hello Humans! I’m Erik Rydeman, a fellow human who’s been creating Clone Drone in the Danger Zone for a long time, and we’re super excited that it’s out now on Xbox One! Right Now!

Clone Drone in the Danger Zone starts with a massively unfortunate situation — your brain has been harvested by robots. We’ve all been there, one day you’re all human and spongy, the next you’re shiny and require rebooting every now and then. But there’s always an upside to being put into a clanky new body, and that upside is Laser Sword. Yep, laser sword.

Now it’s all great having a laser sword but what do you do with a laser sword, well the answer is slice! Clone Drone In The Danger Zone is all built with voxels, meaning you can precisely slice exactly where you want, and that exact part will fall off of your now wobbly-cut enemy. Is Spider-tron 6000 looking down at you from its great height? Chop off its legs and see eye to eye! Hammer Bots swinging hammers at you? Chop off their arms! As you decimate the opponents in the Arena, you’ll see robot parts flying everywhere, but if swords just aren’t your thing and you’ve a taste for the finer weapons in robot life, check out a selection of Bows, Spears and Hammers too! Variety is the spice of mechanical life after all.

To add to your selection of limb chopping weapons, you can also upgrade your arsenal in a massive variety of ways. Create a tankier robot with upgraded Armor, move at light speed with a Jetpack upgrade, or if you’re feeling particularly hot, you can attach Flame Breath to your new metal-clad body.

On top of a thrilling single player experience which sees you defying the robot overlords, Clone Drone In The Danger Zone also features a fully-fledged multiplayer package in which you can destroy your friends. Slice and hack in 1v1 duels, be the last robot standing (well, hopefully) in Last Bot Standing or combine forces and use the power of friendship in co-op!

We’re delighted that Clone Drone in the Danger Zone is out now on Xbox One and Xbox Series X|S, and we hope that you enjoy your time checking it out! If you want to keep up to date with all things robotic combat, you can follow us on Twitter or TikTok where we post a whole lot of content! Thanks for having me, Xbox! 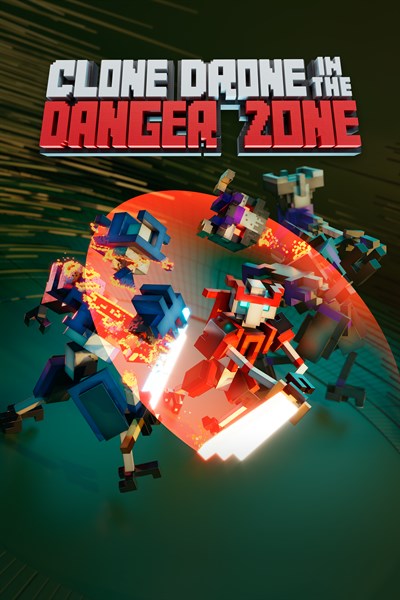 Clone Drone in the Danger Zone

☆☆☆☆☆
79
★★★★★
$19.99
Get it now
Xbox One X Enhanced
Clone Drone in the Danger Zone is a robot voxel slice-em-up where any part of your body can be sliced off. With your mind downloaded into a robot gladiator, you must survive the sinister trials of the arena.

Singleplayer Game Modes:
• Story Mode – One part epic tale of human defiance, another part laser swords.
• Endless Mode – Challenge yourself to fight through 86 level variants spread across 7 difficulty tiers. Can you make it to TITANIUM?
• Challenge Mode – Bow-only, hammer-only, can you still survive the arena?

Multiplayer Game Modes:
• Last Bot Standing – A Battle-Royale-like game mode with short, 5-10 minute play sessions and up to 15 players. Survive, and shower in the remains of your fellow robot competitors.
• Private Duels – Challenge your friend to a 1v1 duel!
• Online Co-op! – Use the power of human friendship (and laser swords!) to survive in the arena!