Skip to content
ASNF 2 years ago 4 min read
The first update to World of Warships: Legends in 2021 is packed to the brim...

The first update to World of Warships: Legends in 2021 is packed to the brim with new additions, with main attraction being the long-awaited Aircraft Carriers! What’s great is that carriers are just one of many highlights which include: the Dragonslayer campaign, featuring battlecruiser Siegfried, British heavy cruisers coming in early access, a new team deathmatch mode – Arena, as well as Lunar New Year content.

Aircraft Carriers, requested so much and so frequently, are finally making an epic appearance. Flattops known as Langley, Ranger, Hōshō, and Ryūjō are the very first carriers to enter our legendary waters. To get your chance at becoming king of the skies, you’ll have to finish a few battles against the newcomers first. Don’t tarry either! The event will only last until February 15! The Aircraft carriers are quite a bit different to what you are used to, and it concerns both their controls, as well as their strengths & weaknesses. They add an extra dimension to the gameplay we know and love, so it’s paramount that we receive as much feedback from you during the event before these ships are sent back into the dockyards so we can work our magic and bring them back out for a full release later in the year.

For those fond of slaying dragons, our new campaign might just be the thing! While there’s no literal combat with mythical beasts involved, our new German battlecruiser Siegfried can take on many an enemy, whichever steel monster that might be. Based on a design for heavy surface raider, Siegfried offers six powerful 15-inch guns and a set of torpedo launchers per each side. Her armor configuration also allows for interesting angling battles for the tacticians among you. The campaign consists of one hundred milestones, divided in five parts, one per week of the update. Find your rhythm, beat the challenges, and unleash the dragonslayer! What’s more, once you’re done with the campaign, you can continue completing missions to unlock the new currency – Steel Badges, which can be spent on a plethora of items in the Forge, including USS Missouri, one of the legendary Iowa-class battleships!

If it’s unbridled adrenaline you’re after, Arena might just quench your thirst! This is a new game mode that pits four teams of three players against each other in a battle for survival. Season 1 will feature tier V ships for a wide choice of options and your success won’t go unnoticed—we’ve prepared a ladder system that places players based on their XP earned in Arena battles onto a leaderboard. Reach the top 1{72fac96fb8a068703572150b1f107310d4a58cf34158e9799732d1314586e298} and get a hefty helping of Steel Badges! If you’re not after hardcore competition, just give it a try and get some of the intermediate rewards in just a few battles.

Heavy lies the crown… Not necessarily so, when you’re helming on of the new heavy British cruisers! They possess a great kit, including a choice of HE and AP shells, Sonar and Repair Party. Remember to position your ship well and apply your arsenal liberally. Earl Grey tea and salt water never tasted so great together! The Tier IV to VI heavy cruisers can be found the new Royal Navy containers for early access in this update. Another cool item in these containers is the Union Jack camo that’ll help you outfit your ships of any nation in the coveted British flag!

One would think that we’re done with New Year celebrations, but there’s still the Lunar New Year coming up! Starting February 12, look out for two collectible premium cruisers, special event containers and unique camouflages. A specially themed port is just the cherry on top of this varied and storied update!

Strap in, log in, and start your February by taking off in World of Warships: Legends. Turn the tide! 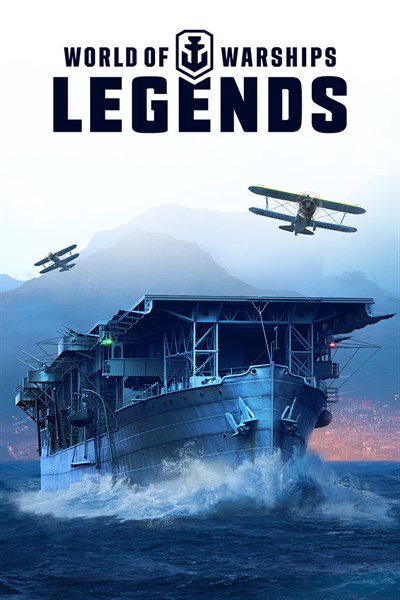 ☆☆☆☆☆
97
★★★★★
Get it now
Experience epic naval action in World of Warships: Legends, a global multiplayer free-to-play online game in which you can master the seas on the decks of history's greatest warships! Recruit Legendary Commanders, upgrade your vessels, and stake your claim to naval domination alongside and against players from around the world.

FEATURE RICH
Develop Legendary warships such as Yamato from the ground up in the Bureau, compete in Ranked Battles seasons for exclusive patches and extra rewards, and finish epic Campaigns to gain powerful new ships!

CHOOSE YOUR COMBAT STYLE
Take control of over 120 destroyers, cruisers, and battleships—a range that's perfect for every playstyle, whether it be an all-guns-blazing approach, more careful and methodical attacks, or tactics that are unique to you.

TURN THE TIDE IN EPIC 9V9 BATTLES
Join forces with friends to challenge players around the world, and work together across consoles to devise strategies and plan attacks via voice chat. Cooperate to outgun your opponents and Turn the Tide of battle!