Skip to content
ASNF 2 years ago 4 min read
In Aground, you mine, craft, and build your way up from a single shipwrecked survivor...

In Aground, you mine, craft, and build your way up from a single shipwrecked survivor all the way to a space-faring society – from nothing to everything. I feel like the development of Aground was a similar process.

When I first came up with the idea for Aground, I had the singular theme of progression. I wanted to be able to progress from stone tools all the way to space, incrementally mining and crafting your way far beyond what you might assume possible. But, unlike previous games, I didn’t carefully plan out each step of the journey. I wanted to mirror that process, incrementally building up each stage of the game as I went, remaining flexible and able to change stages of the game as necessary.

This made for a rocky start – for not only did I not know exactly where the game would end up, I also received mixed feedback from early playtesters and no interest from publishers. Disheartened, I fixed the game up as best I could from the feedback and released it as a free browser game in October 2017. Now, over 3 years later, Aground has finally fulfilled my dreams for the original idea and launched on consoles, becoming by far my most successful game.

The real breakthrough on my journey was all the support and feedback from the people who played Aground in the browser. Not only was it highly rated and much better received than the early prototype, but I had more suggestions than I knew what to do with. The incremental design turned from a weakness into a strength, and I plowed ahead adding updates, interacting with the budding community, and building what eventually became the Aground demo.

Little did I know how big of a mountain I would have to climb from the demo to the full version. With only a vague objective in sight, ambitious goals, and a willingness to accept all kinds of suggestions, the game quickly spiraled out of control. Among game developers, we call this “Feature Creep,” and it has killed many games.

With the early access sales not being as high as I wanted, and the to-do list growing to an insurmountable size, I was definitely worried. In fact, I feel like for the majority of Aground’s 3 years of development, I was worried about one thing or another – which is unusual for me. But, I wasn’t daunted. I knocked off items on the to-do list one at a time like I was mining out an entire island in Aground. I scrapped items that weren’t worth it. And, when I finally reached the summit and added the endings to the game, I looked down at everything I accomplished with amazement.

Despite the early stumbles, the feature creep, and the uncertainty and worries the incremental design of Aground caused, looking back I wouldn’t have done it differently. Every bugfix improved the polish of the game. Every feature added to the depth and variety of the world. Every suggestion and conversation about Aground built up the community that Aground owes much of its success to – including the vibrant modding community.

I aimed for the stars, wanting to make something bigger than I had ever made before. And I ended up with something even greater than I imagined. With unplanned paths, entire star systems, multiplayer, console ports, a supportive community, and an overwhelmingly positive PC launch, Aground fulfilled all my game development goals, and more.

Maybe you’ll feel a little like me playing Aground – building up to great things. Hopefully without all the worries and difficulties. Aground was an incredible journey for me, and the game mirrors that journey in many ways. 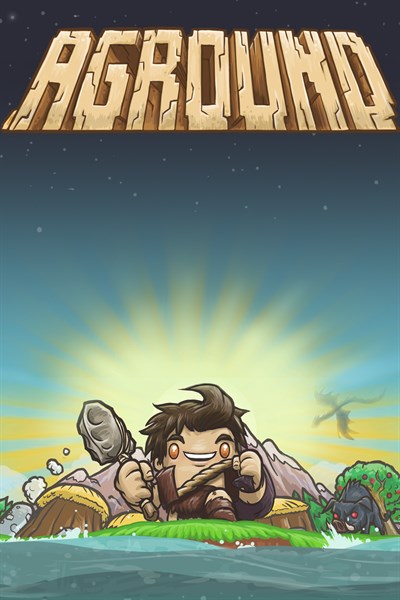 ☆☆☆☆☆
6
★★★★★
$14.99
Get it now
Survival is only the beginning. The only way for humanity to have a future is to return to the stars and confront them. But, it will require a lot of ingenuity and help to recover everything that was lost, and even that might not be enough…

Aground is a Mining/Crafting RPG, where there is an overarching goal, story and reason to craft and build. As you progress, you will meet new NPCs, unlock new technology, and maybe magic too. Will you be able to raise dragons? Launch into space? The sky is literally not the limit. Beneath its simple exterior, Aground hides a lot of depth and surprises that will keep you wondering “what’s next?”