Skip to content
ASNF 3 months ago 4 min read
Summary Last Days of Lazarus is heavily inspired by the post-communism period in Romania Get...

Hi, I’m Catalin Marcu from GrimTalin, one of the two developers of Last Days of Lazarus – a dark post-communist adventure that tells a disturbing story about family, loss and sin. George, our game director from Darkania Works, and myself are extremely excited that our game is finally releasing on Xbox Series X.

While I joined the development of the game about a year into its making, I have instantly resonated with its setting into not only our country, Romania, but also in a difficult period for us: the post-communist transition period. I feel we have achieved our goal of highlighting, through a supernatural distorted lens, what our life was during those difficult years, as we ourselves were growing from kids to teenagers.

I was four and half when communism in Romania fell. While there wasn’t much unrest in the small town I grew up in, the big cities and our capital, Bucharest, were in a full Revolution. I remember one of those nights, as my dad was leaving for his night shift at the factory, he told me and my older brother: “Stay inside and behave. They’re shooting in Bucharest.” I don’t know how much I understood at that early age the gravity of what was happening, but my dad’s worried face conveyed it was something important and those words stayed with me.

What followed was the period of transition. A sacrificial generation as they called it. Our parents were supposed to sacrifice themselves to poverty and continuous struggles so that my generation would have a real chance at democratic life. Quite inspiring! What that really meant was the right people with the right connections got a free pass at looting almost everything from the country. It meant corruption ran rampant. It meant a generation that was still blocked and kept into the old way of thinking and surviving.

Communism didn’t disappear from our country overnight. Neither did all the cultural and commercial Russian influences. We still imported a lot of stuff from all the countries in the old communist bloc. That is the main reason there are so many items in our game that look like they’re from Russia. That’s why there are texts in Russian here and there. Some people might mistakenly think the game is set in Russia or that we placed those items in the game in error. In fact, that’s what our lives in Romania looked like back then.

During communism, one of the ways people coped was through religion and that remained a defining feature for us into the transition period. Our Orthodox Christianity has always been blended with many traditions, many of them of pagan nature. We are religious while also believing in ghosts, curses, disenchantments, fortune tellers and so on. For people on whom life has been particularly hard, it was common to become obsessed with religion and the belief in our superstitions. We wanted our game to illustrate as best we could this distorted view of Christianity.

Our country has always been praised for its beautiful scenery. This is also something we worked hard to bring in our game, with some eerily beautiful locations inspired by our real places and architecture, like the monasteries and the Bran orphanage, blended into lush forests.

I personally am super happy to have been given the chance to work on a game that highlights our country, its traditions and its difficult past. It’s a rare setting in games and I hope you will take the chance to explore it and take in all the details. And, of course, help our titular Lazarus find out the truth about his family’s troubled past and the fate of all of its members. Last Days of Lazarus is out now on Xbox Series X|S! 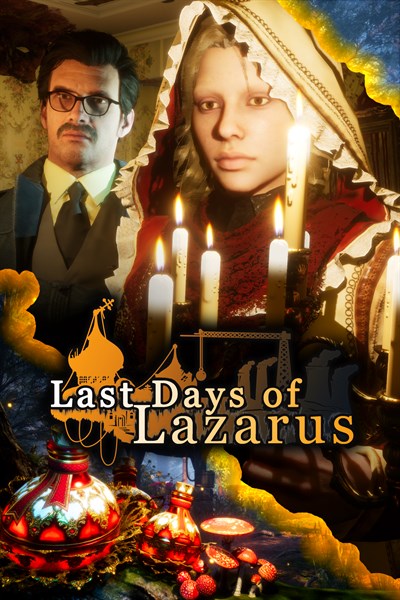 ☆☆☆☆☆
4
★★★★★
$19.99
Get it now
Set in a post-soviet Eastern Europe, Last Days of Lazarus tells the story of a troubled man, long estranged, returning to his childhood home after his mother’s death to spend some time with his sister Lyudmila. But as the country around him seems to fall apart, so does reality itself, with a series of unexplainable events leading him on a quest to find out more about his family’s disturbing past.

Last Days of Lazarus is a first-person adventure game with a strong narrative, rich visuals and supernatural elements, heavily inspired by post-communist Romania, its troubled history, eerie locations, religious beliefs and strange superstitions. As the story unravels, you’ll meet questionable characters whose corrupted version of the truth you’ll need to navigate. With a troubled past yourself, you’ll struggle not only with solving the mysteries laid upon you but also with keeping alive any sliver of hope for salvation.