Skip to content
ASNF 1 year ago 4 min read
When the Steel Wool development team was given the opportunity to work on Five Nights...

When the Steel Wool development team was given the opportunity to work on Five Nights at Freddy’s: Security Breach, we dug deep for inspiration from our childhoods, high school jobs, and parental party planning duties to build the most fantastic pizzeria to ever exist.

We decided the best course of action was to begin with the star and central figure of this particular pizzeria, Glamrock Freddy. Everything in the Mega Pizzaplex revolves around Freddy and the new glam rock band. Just like the original game, Freddy deserved a main stage surrounded by pizza and party tables filled with fans. However, this new state of the art animatronic band would need even more room to move and perform. We decided to add elaborate stage lifts to raise Freddy and the gang above the audience flanked by stadium-sized concert monitors. The stage would be as updated as they are.

Now that we had a concert venue as the centerpiece, we needed to surround it with activities and attractions of every type. We wanted a putt putt golf course, go-karts, laser tag, retro arcades, modern arcades, dance floors, a movie theater – everything. However, Five Nights at Freddy’s is not a series about set design, it’s about the horrific animatronic stars. So we decided to design a character specific attraction for each member of the band.

Due to the ongoing adventures of Freddy in Space, we immediately went to work on Glamrock Freddy’s Fazer Blast lasergame. It was the first set mock up completed in the entire game. Not only did we want to honor the source material, but we really wanted to include solid references to Scott’s super fun side-scrollers.

Everyone in the studio looked at Roxanne Wolf and just knew she was meant to be a racer. She would become the brutally competitive go-kart champion of Roxy Racers. The art team had a blast making her a trophy winning daredevil in the raceway’s surrounding art. Not only was the location heavily inspired by Roxy’s rebellious look, the raceway art then informed her elitist personality and VO performance. She is the best and will let the losers know it. 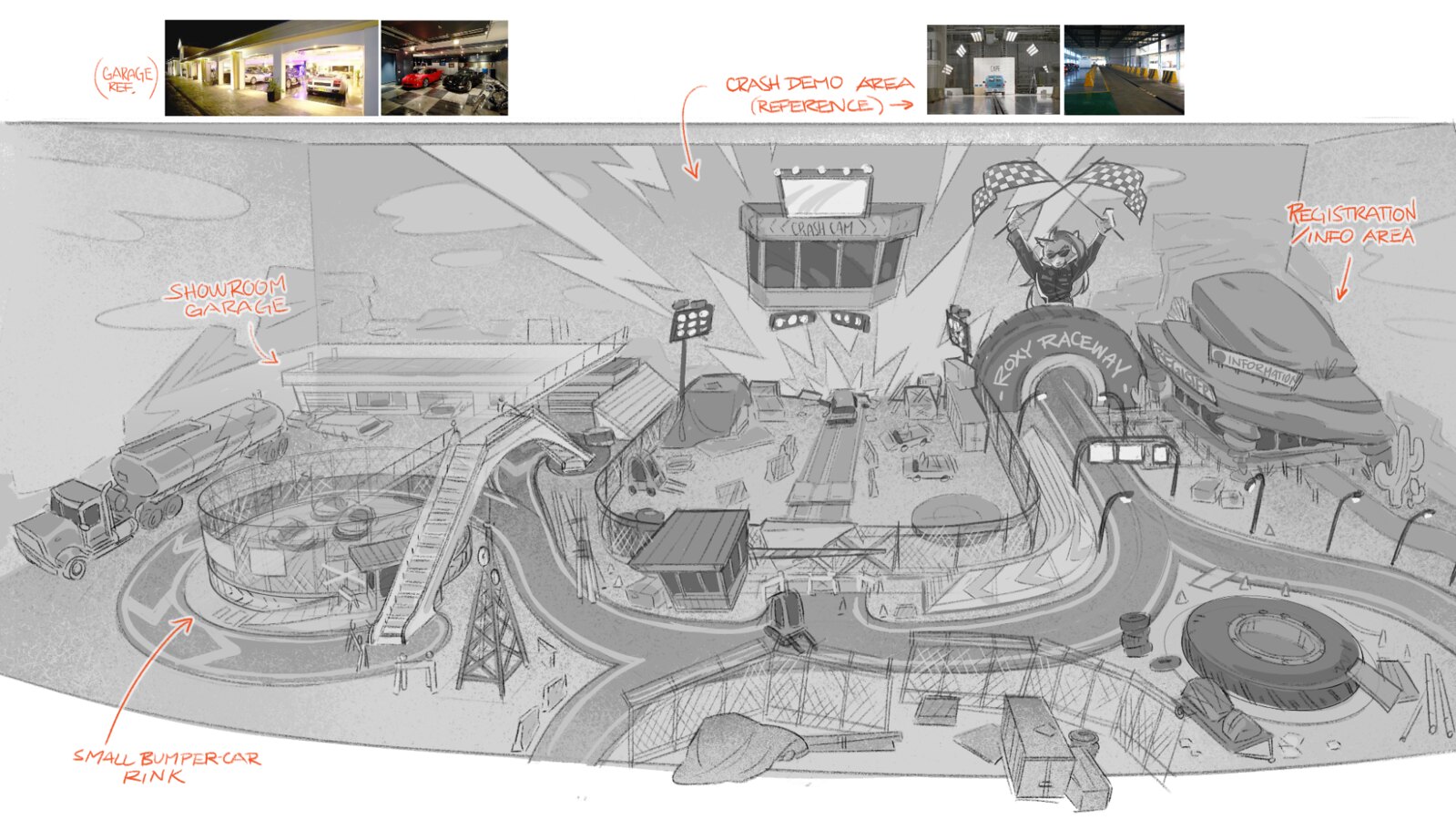 Montgomery Gator inspired the Monty’s Gator Golf indoor putt putt golf course. Toxic barrels of brightly colored ball pit balls flow through a blacklight course of wooden shacks, water hazards and rock n’ roll iconography. We wanted Monty’s to have arguably the worst hazards of any course ever. Have you ever tried golfing while surrounded by ball pits? 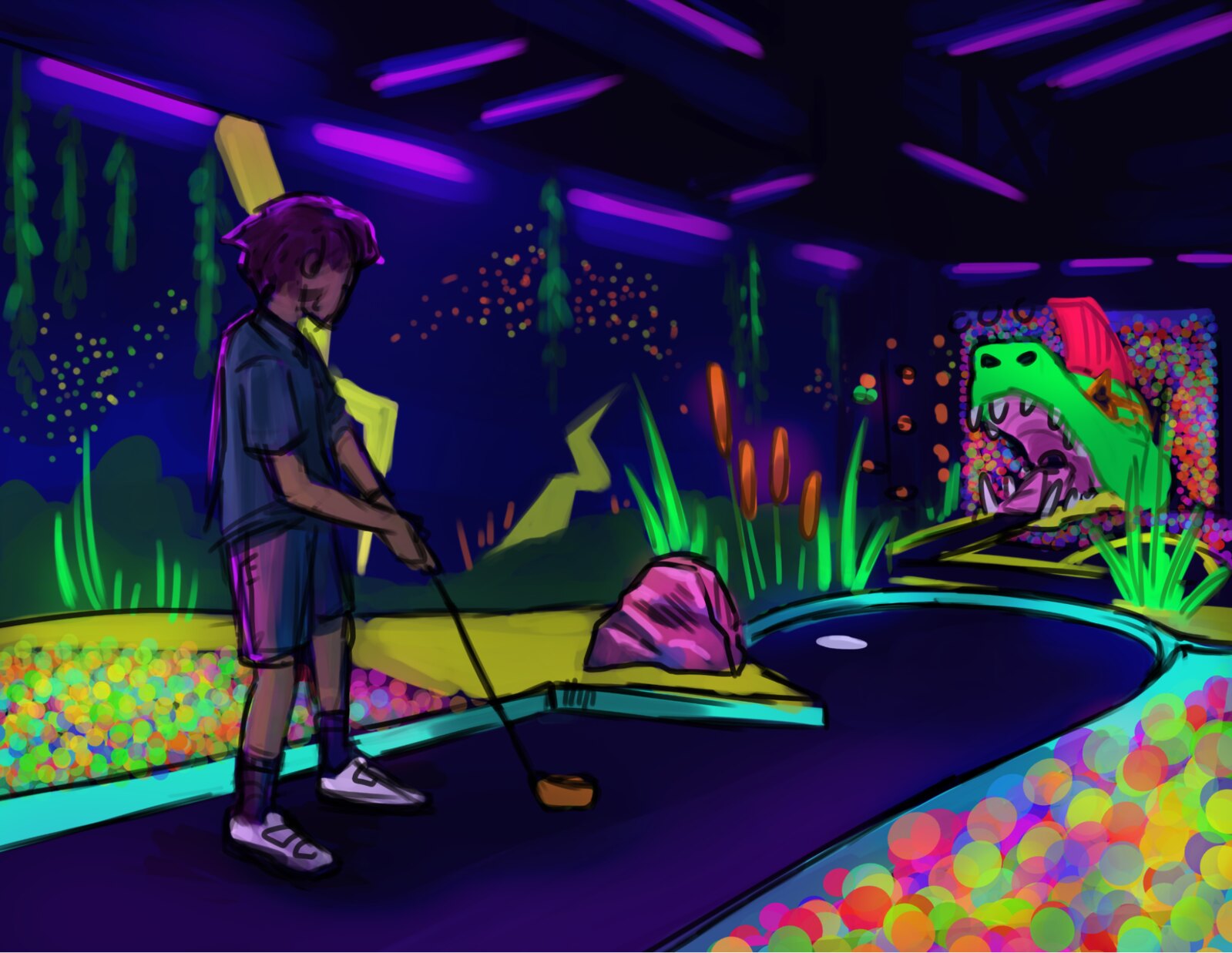 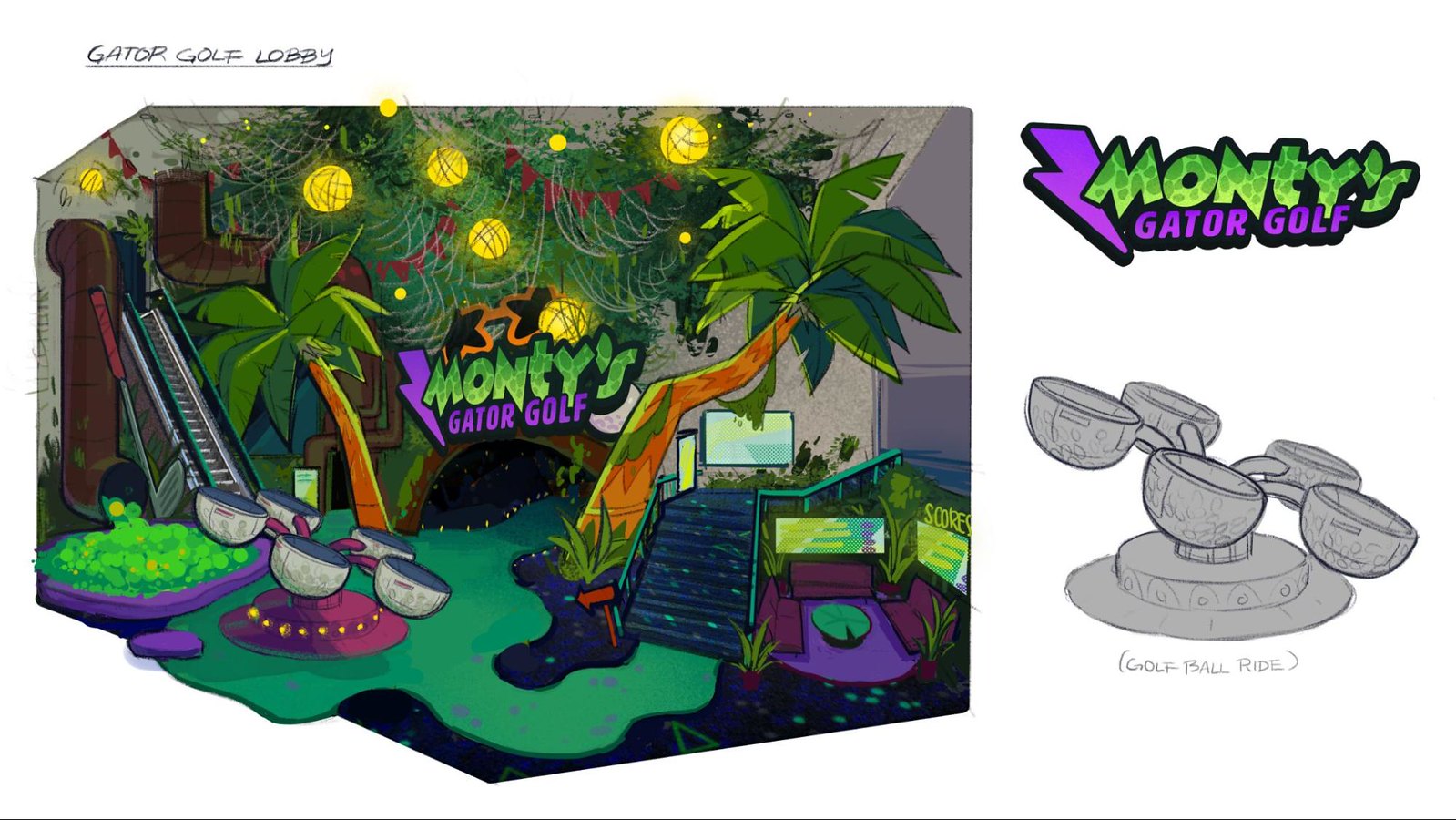 Finally, we had to put ourselves in the mindset of Fazbear Entertainment. What do they want? What are they really after? Does anyone know for sure? What we do know is that they want to squeeze as much money as possible from every visitor! We looked at a lot of real world references to develop a Fazbear appropriate list of money making schemes throughout the building.

The Mega Pizzaplex has very personal ties to me. I was a child of the ‘80’s in Tacoma, WA where I grew up hiding from the rain in movie theaters, bowling alleys, arcades, and indoor malls. There were also several quirky pizzerias and fun centers in the area.

As a teen, I became an usher/projectionist at my local multiplex. All of the “client facing” areas were flashy, shiny, neon, and impressive. However, if you go behind the scenes like I did, then you witness the disgusting underbelly where the teen work staff lives. Working in filthy concession stands, cleaning bathrooms, storing boxes of soda syrup in chain link storage pens, hydraulically compacting stacks of cardboard and garbage bags, and sweeping piles of oily popcorn behind movie screens during busy weekends are some of the best real-world experiences I could have had to prepare for this project. 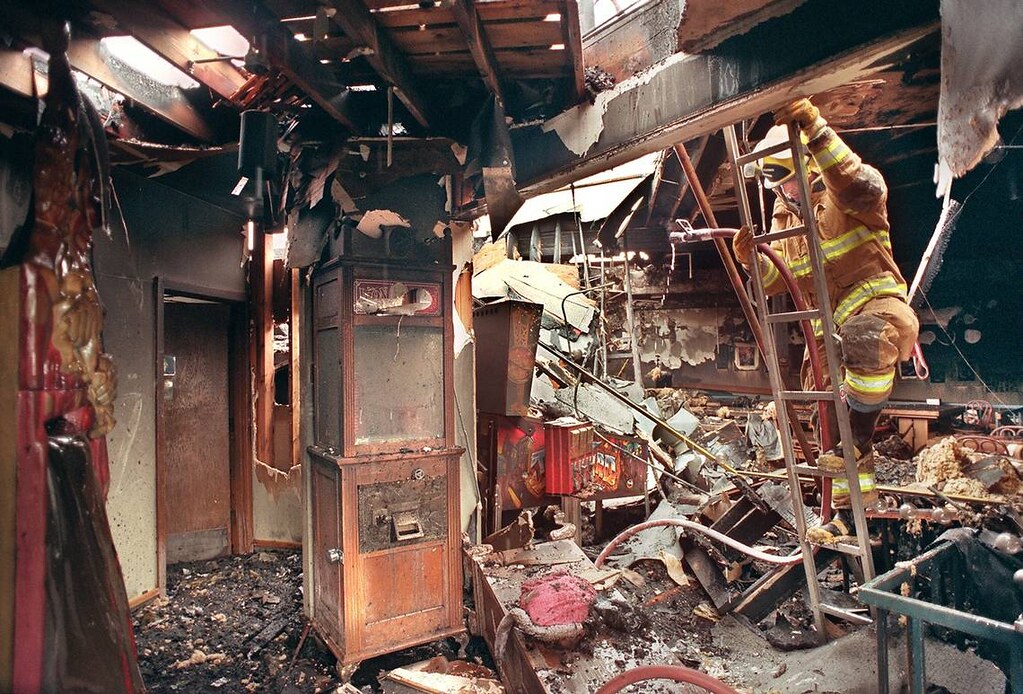 Reference image – The Tacoma, Washington Pizza and Pipes burned down in 1999. 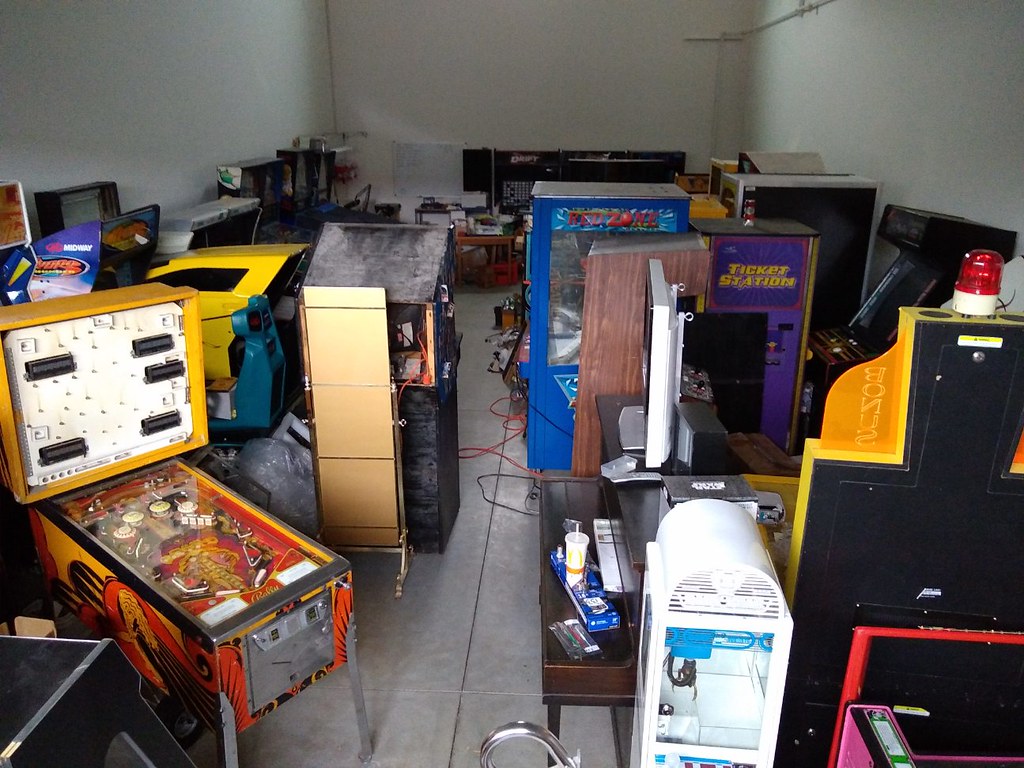 Insider knowledge: the importance of carpet

My brother, Collin, owns an arcade called the Ruckus Room in Bellingham, Wa. Throughout the development of the game, he was a great source of insider industry information on the actual Family Fun Centers (especially while all the fun centers were closed during Covid). He told us all about the importance of decorative carpet tiles! Apparently, new carpet designs are one of the hottest items at Family Fun center conventions. Armed with that knowledge, we knew that the Mega Pizzaplex had to have the best carpet squares in the world. So, if you look closely, every themed area has multiple personalized Fazbear carpet designs in various colors and imagery which reflects the theme of the zone. 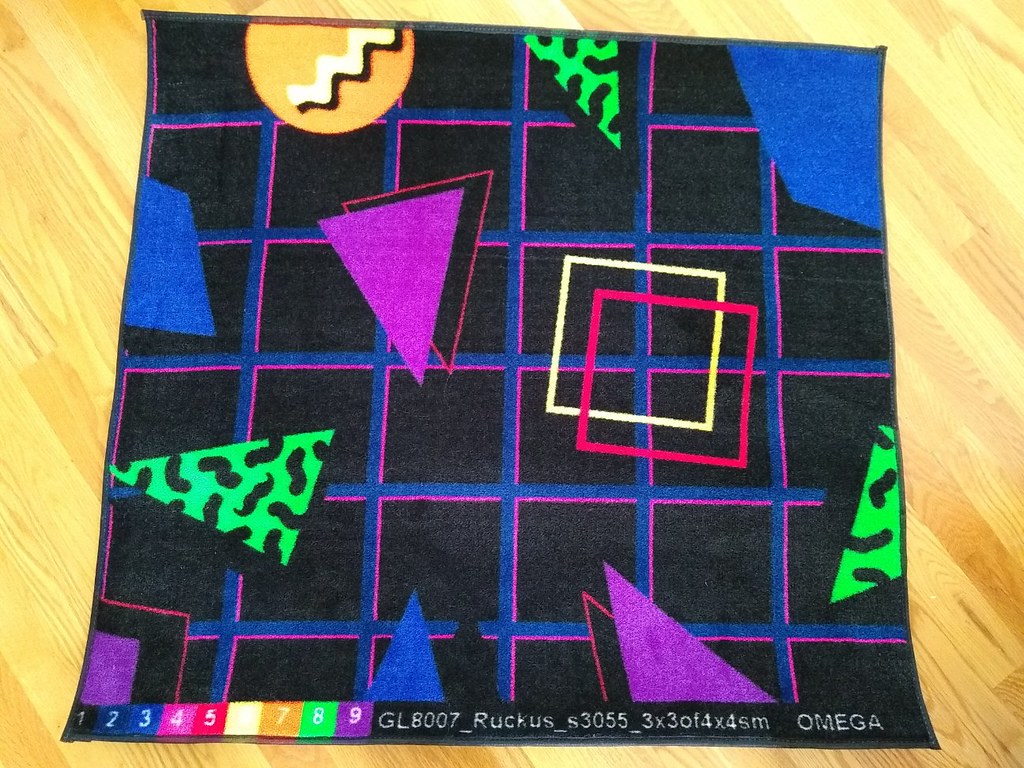 There is certainly more to discuss about the design of the building, than we can cover in one blog post. You are going to have to experience the Mega Pizzaplex yourself to truly understand the scope of the building.